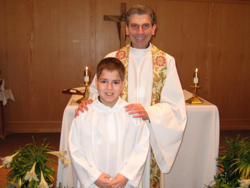 Noah served at Mass for the first time today, and I have to say that I was so proud I was just beaming. That’s him in the photo above with our pastor, Father David Berberian. For me, this day ranks way beyond his first Little League game or even his performance as the Tin Man in the Wizard of Oz back when he was in second grade, which is saying something.

I know this wasn’t an easy step for Noah. He doesn’t really like to be up front and center — wonder where he gets that from — but he went ahead and did it anyway, and he did a great job. Next stop: the “big church” on Sundays.