In these parts, throat blessings are hard to come by. No, make that near impossible. It’s just not done. At least not at our parish. So years ago I took it upon myself to do the blessings. And, yes, that’s allowed. The first time I blessed throats for my class of fourth-grade faith formation students, they looked at me in fear and asked if I was going to light those candles before holding them up to their throats. Ah, how sad that these kids don’t know some of the more interesting traditions of our faith. But once I told them about St. Blaise, a bishop and martyr who is said to have healed a boy who was choking on a fish bone, they were all in, and eagerly so. END_OF_DOCUMENT_TOKEN_TO_BE_REPLACED

Some advice never gets old

Whenever I give my retreat talk titled “Broken, Beautiful, and Beloved: Learning to See Ourselves through God’s Eyes” (last weekend, for example), I quote St. Francis de Sales twice. Actually, I quote St. Francis de Sales a lot in my life — in posts, in books, in columns, in workshops, but in this particular talk I quote him twice. This 17th century bishop had so much to say that remains incredibly relevant to our 21st century lives. END_OF_DOCUMENT_TOKEN_TO_BE_REPLACED

No, my fascination with this beautiful name started in college, when I was on a trip to China and spent three weeks traveling with a young woman named Chiara, who was part of our university group. The name struck me as the most beautiful name I’d ever heard, but that may have had something to do with my being named Mary. As they sing in the old-time classic, “there is something there that sounds so square.” Chiara (the name, not the person) was about as opposite of “square” as I could imagine. END_OF_DOCUMENT_TOKEN_TO_BE_REPLACED

What’s holding you back? #FindIggy

They had me at St. Ignatius bobblehead.

Head over to Find Your Inner Iggy to see how you might win some grand prizes today, the Feast of St. Ignatius Loyola. The founder of the Jesuits is the inspiration for this fun-yet-serious campaign to help people find God at work in their lives today. In much the same way that St. Ignatius discovered God in unlikely places in his life almost 500 years ago. END_OF_DOCUMENT_TOKEN_TO_BE_REPLACED

Wisdom Wednesday: The ‘mental picture’ of your life

Last week, after our date-night dinner, Dennis and I stood on the Albany side of the Hudson looking out and, as I usually do, I pointed to a beautiful steeple on the Rensselaer side of the river and wondered what church it might be.

On this particular night, Dennis decided to solve the mystery and drove across the bridge to the church you see there on the left, St. John the Evangelist-St. Joseph, just down the street from the train station. We caught a beautiful sunset from that spot and found a lovely little garden dedicated to St. Padre Pio. And so I thought I’d share some Wednesday Wisdom from that beloved Italian saint:  END_OF_DOCUMENT_TOKEN_TO_BE_REPLACED

‘Let nothing make you afraid…’

Happy Feast of St. Teresa of Avila. I have some of her words of wisdom posted prominently next to my desk at all times:

“Let nothing trouble you. Let nothing make you afraid. All things pass away. God never changes. Patience obtains everything. God alone is enough.” – St. Teresa of Avila

On this feast day for Blessed Mother Teresa, I got to thinking about Mother Teresa moments in my life. The photo above is one. I had just arrived in Rome and was a little lost, when I came upon these two Missionaries of Charity. They were walking down the street, saw this homeless man and immediately knelt down beside him, took pizza bianca from their bags, and gave it to him with such tenderness and care. Of all the basilicas and great works of art I captured on camera during that trip, this image remains one of my favorites from my time in Rome.

My other Mother Teresa moment actually involved Mother Teresa. I was a young, 20-something reporter working for Catholic New York when I met her in St. Patrick’s Cathedral. It was after an anniversary Mass for the late Cardinal Terence Cooke. Someone introduced me to Mother Teresa, and she reached over and touched my arm. For the longest time I held onto that sweater, not because I liked it very much (I didn’t) but because Mother Teresa had touched it. Finally, somewhere along life’s way, it got passed on or tossed into a donation bag. I’d like to think some person at a shelter or salvation army store got a whole bunch of unexpected grace when they picked up that used sweater.

I was having a hard time trying to decide what Mother Teresa quote I would include here today. There are just so many pearls of wisdom. Then I opened a book of daily reflections on peace (not a Catholic book) and found these words from a sign that was posted on the wall of Mother Teresa’s Shishu Bhavan children’s home in Calcutta:

People are unreasonable, illogical, and self-centered,
Love them anyway.
If you do good, people will accuse you of selfish, ulterior motives,
Do good anyway.
If you are successful, you win false friends and true enemies,
Succeed anyway.
The good you do will be forgotten tomorrow,
Do good anyway.
Honesty and frankness make you vulnerable,
Be honest and frank anyway.
What you spent years building may be destroyed overnight,
Build anyway.
People really need help, but may attack you if you help them,
Help people anyway.
Give the world the best you have and you’ll get kicked in the teeth,
Give the world the best you’ve got anyway.

And in case you just want one short keeper of a Mother Teresa quote, here you go:

“What can you do to promote world peace? Go home and love your family.”

For moms everywhere, on the Feast of St. Monica 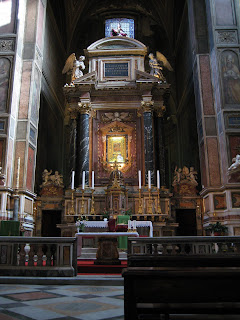 Just about one year ago, when I spent 11 days in Rome, I had the chance to visit the Church of St. Augustine (seen here) multiple times since it was just around the corner from Santa Croce University, where I was attending a seminar for journalists.

In this beautiful church, complete with an altar and angels by Bernini and paintings by Raphael and Caravaggio, is the tomb of St. Augustine’s mother, Monica, whose feast we celebrate today.

I knelt before her tomb, so grateful just to be in Rome, and whispered prayers for all the moms who had asked me to remember their intentions while I was in the Eternal City. And I prayed for mothers everywhere, because no matter what our background, no matter how much we do, we often think its not enough, that we are not enough.

So today, as then, I am remembering all the moms I know and those I don’t, praying we find the patience and strength we need to live out our vocations fully and joyfully and that we also have eyes to see not only where we think we fall short but where we are doing our best — teaching our children, serving our families, trusting in God — day after day, year after year.

I remembered all of you this morning as I said Morning Prayer, and I will remember you again in just a little while when I go to Mass. Please remember me in your prayers as well. And let us turn to St. Monica for comfort when we do come up against those hard times and wonder how we will get through. She was living proof that the power of persistent prayer can change lives — our own and those of our children.

She was one of Jesus’ closest disciples, there at the foot of the cross when the others ran away, the first one Jesus appeared to after the Resurrection, a critical figure in the earliest Church, the “Apostle to the Apostles,” and yet Mary Magdalene continues to be dogged by the incorrect identification as the prostitute from Scripture, or, when novelist Dan Brown gets involved, as the wife of Jesus.

So today, on the Feast of Mary Magdalene, I was so happy to read “Who Was Mary Magdala?” by Jesuit Father James Martin over on America’s In All Things blog.

The most benign explanation for this confusion over Mary’s identity is that there is a veritable crowd of Marys in the Gospel stories (besides Mary, the mother of Jesus, there is Mary of Bethany and Mary, the wife of Clopas). Mary Magdalene was also, oddly, conflated with a woman who had bathed Jesus’ feet with her tears, dried them with her hair, and then anointed them with oil. In AD 591, Pope Gregory I preached a sermon in which he proclaimed, “She whom Luke calls the sinful woman, whom John calls Mary, we believe to be the Mary from whom seven devils were ejected according to Mark.”

This inaccurate identification became more or less church teaching for at least a millennium.

A less benign interpretation of this “confusion” is that the early church was threatened, even horrified, by the stunning example of a woman among the early disciples. Strictly based on the evidence in the Gospels, Mary Magdalene enjoyed an exalted standing. She was not only the first one to whom Jesus appeared after the Resurrection, but also the one who proclaimed the news of his resurrection to the other disciples, including those who would be the leaders of the early church communities: Peter, James, Andrew, and the rest.

Thus comes Mary’s traditional title: “Apostle to the Apostles.” Her fidelity to Jesus during the Crucifixion, as well as Jesus’ appearance to her, are marks of distinction that place her, at least in terms of her faith, above the men. Some of the “extracanonical,” or “apocryphal,” gospels (that is, those not included by the early church councils with the traditional four Gospels) picture her as the most favored of all the disciples. “[Christ loved] her more than all the disciples,” says the text known as The Gospel of Philip.

Perhaps it was convenient for the early church fathers to dismiss Mary Magdalene and even insult her as a prostitute, fearful of what her role would mean for the place of women in the early church.

They didn’t teach that version in CCD class, did they? Can I get an Amen? Now, please go read the rest of the post — which is an excerpt from Father Martin’s A Jesuit Off-Broadway: Behind the Scenes with Faith, Doubt, Forgiveness and More — by clicking HERE. You’ll get to read Father Martin’s take on the “marginalization of Mary Magdalene” in its newest form, thanks to Dan Brown’s Da Vinci Code, which is too often taken as fact, even by well-meaning Catholics.

St. Mary Magdalene, pray for us.