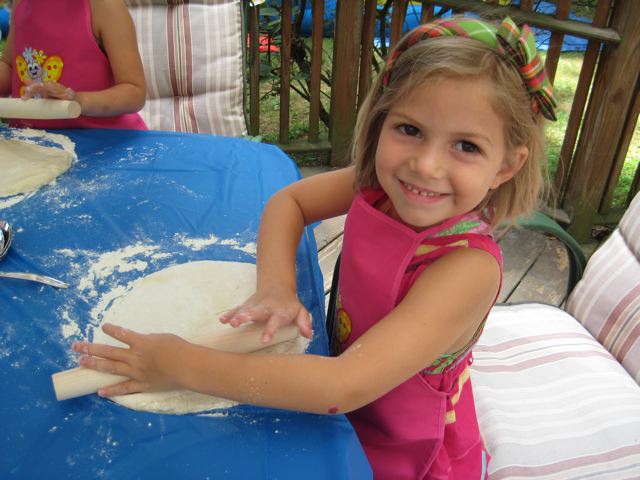 No, my fascination with this beautiful name started in college, when I was on a trip to China and spent three weeks traveling with a young woman named Chiara, who was part of our university group. The name struck me as the most beautiful name I’d ever heard, but that may have had something to do with my being named Mary. As they sing in the old-time classic, “there is something there that sounds so square.” Chiara (the name, not the person) was about as opposite of “square” as I could imagine.

For more than twenty years, the name Chiara lingered in the back of my brain. I never really considered it when I was pregnant with Noah and Olivia. Not sure why not. But when I became pregnant just about  10 years ago, this name was my clear favorite. I loved the sound of it. I loved the fact that it reflected my Italian heritage. (Although we did at one point consider its Gaelic cousin, “Ciara,” which also means Clare but is pronounced KEER-ah, as opposed to key-AR-ah.)

So Chiara Elizabeth was born on July 21, and her Italian name seems perfectly suited to her. Of all my children, she is the one that will settle down with a stuffed artichoke and pull the leaves through her little white teeth as if she’s been doing it for a lifetime in Massa Lubrense, hometown of her great-grandpa. She will go to a deli and request provolone and dried Italian sausage for lunch when the others are getting standard turkey sandwiches. She will scarf down fried calmari and pesto with sausage any chance she gets. (Note that she’s rolling out pizza dough in the photo above.) So the name was definitely a good call.

As my own Chiara has grown over the past  nine years, so has my love of Santa Chiara. Her courage, her faith, her strength were remarkable, especially in light of the fact that she did what she did as a woman in medieval times. Next month, when I finally get to Italy, I’m hoping to find a way to get to Assisi for one day, so I can walk in the footsteps of Francis and Clare. And then some day I’ll take Chiara back to do the same. *(I didn’t get there in 2010, but, God willing, I will be there this October when my pilgrimage group spends two days in Assisi.)

Today, when I opened my “Word of God Everyday” daily email, it included 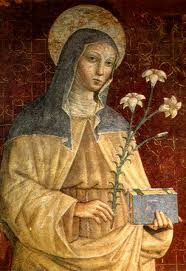 a quote from St. Clare: “Look into that mirror daily, always study your face in it, so that within and without you may adorn yourself with all manner of virtue.”

I liked the quote, which was connected to an Old Testament verse about the Son being a reflection of God’s glory. But something about the quote from Clare didn’t sit right with me as it was. It was incomplete and could be confusing to those of us in the modern world. It almost sounded as though Clare were suggesting that we look into an actual mirror and study our own faces. So I searched for it and found the full quote from a letter she wrote to Blessed Agnes of Prague:

February 3, 2021 • saints
These days — especially in the time of COVID — throat blessings are hard to come by. No, make that near impossible. It’s just not that common anymore, even ...
Read More

October 15, 2019 • saints
The feasts and celebrations that surround us at this time in the liturgical year can do a soul some much-needed good. It’s hard to feel like a solitary ...
Read More