Centipedes and the sanctity of life 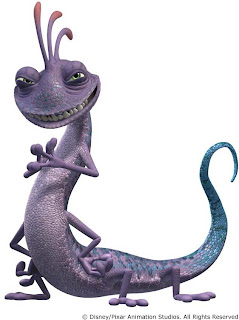 So yesterday I ran downstairs to the unfinished side of my basement to throw in a load of laundry, and there on the cinderblock wall in front of me was the biggest house centipede I’d ever seen. After my initial “ACK!” reaction, I looked for the biggest thing I could find with plans to smash it, but it got away, moving in that creepy way centipedes do, all swervy and fast with legs and antennae going every which way. Down behind the rack of off-season clothes it went, and I made a mental note to shake out my jackets the next time I plan to wear one.

The incident was one that made for fun Facebook fodder. A quick status update about my centipede – nicknamed Randall after the nasty centipede-like character in the movie Monsters Inc. — garnered 30 comments by the time evening rolled around. What started as silly I-hate-centipede humor turned serious as one friend with Buddhist leanings suggested that those of us in the anti-centipede camp consider why this bug is marked for execution when something, say, as beautiful as a Monarch butterfly would incite quite a different reaction. Should something – even as something as seemingly insignificant as a centipede – die an automatic death simply for being created ugly?

“We make light of killing bugs, but what we’re saying is that some of God’s creatures deserve to be killed, for no other reason than we find them ugly,” my friend wrote.

We went back and forth a bit, with me acknowledging that, yes, I want to kill giant centipedes because they are creepy and their movements aren’t nearly as endearing as a Monarch butterfly’s might be. But the friend who won’t kill the centipede will eat a hamburger, so that raises other questions, at least in my mind. If meat isn’t “necessary” to a healthy diet, is killing a cow to get dinner ingredients justified any more than killing a bug because it might crawl into our clothes or figuratively under our skin?

All of this got me to thinking less about the centipede and more about another issue that’s been rearing its head in my life recently. Although I’m a vegetarian who abstains from all pork, beef, chicken, and the like, with only occasional servings of seafood, I didn’t choose that path for animal rights reasons. Originally I chose it because my mother died of colon cancer and I wanted to do everything I could to avoid her fate, although I did have issues with factory farming and other cruel – and downright disgusting — practices within the meat industry. Later, when Olivia, at age 7, decided she didn’t want animals to die for her dinner, I rejoined the vegetarian ranks in solidarity with her. Since that time, I feel myself moving more toward an animal rights stance, although I’m not there yet.

But our vegetarian lifestyle, and Olivia’s increasing interest in animal rights, has led to some long and rather frank conversations lately about things that have surprised and confused my socially aware 12-year-old. I explained to Olivia that she is likely to be an anomaly in most vegetarian and animal rights circles as she grows up. Why? Because she is a pro-life vegetarian like her mama. She looked at me as if I’d lost my mind when I told her that many (most?) vegetarians do not share our view. How, she asked, how could it possibly be that someone who doesn’t want to eat a chicken would think it’s okay to allow a baby to be killed while growing inside its mother? She knows already that many people in the animal rights movement would fight tooth and nail to prevent an unborn piglet or panda or calf or eagle from being killed in its mother’s womb, and she honestly couldn’t fathom how anyone who feels the way she does about animals would feel differently about people. The two seem to go together like hand in cruelty-free glove.

It certainly is a contradiction of grand proportions, one that seems to get glossed over in all the conversations about life and creation and preservation and nature. I see it in the magazines I get, the emails I receive, the newsletters from various vegetarian groups that find their way into my mailbox. We will put bumper stickers on our cars to save trees and salamanders and whales, but a bumper sticker that suggests saving babies brands you as a “hater” in this day and age. And that’s not just intolerance meant to intimidate, that’s willful ignorance of a truth once proclaimed by Dr. Seuss’s Horton: “A person’s a person, no matter how small.” Even a person no bigger than a house centipede.