Middle child memories in the making 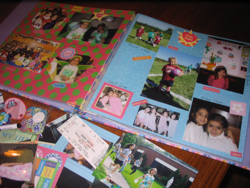 I’m the oldest child in my family, so I never really got the whole middle-child thing — until I had Chiara almost three years ago and Olivia was pushed into the middle slot. At the outset it didn’t seem like such a big deal. She got to be both a big sister and a little sister. She had someone to protect and someone to protect her. All in all, a nice place to be.

Then slowly, over the next year or two, the middle-child syndrome began to rear its ugly head. Actually, some of it started as second-child syndrome. You know, the seemingly universal phenomenon where the second child has less of everything the first child had — from scrapbooks to attention.

Where Noah has a library of photo albums lining the top shelf of his closet, Olivia has some bags and a few stray envelopes filled with undated, unordered photos. The sheer volume of Noah photos compared with Olivia photos is somewhat appalling. When Noah learned to crawl, we took so many pictures that if you put them all together and flip through them really fast, it looks like an animated film.

At the other end of the family spectrum, Chiara, too, has an overabundance of baby photos thanks to the digital era and the fact that by the time she came along Dennis and I were clamoring to take baby photos again. In fact, I’ve gotten so picture happy with Chiara lately that Dennis cringes every time he opens our photo program and sees yet another batch of impish grins staring out at him.

There’s no doubt about it, when it comes to tracking the lives of our children, we dropped the ball with Olivia. Or at least we had until today. This morning, the first official day of mid-winter break, Olivia begged me to get out the scrap-booking kit she received two years ago. Still pristine in its plastic wrapper, I took it down from the closet and said what I always say when she asks to start the album, “Later,” (which usually translates into never.) But with the album taunting me from the dining room table, I figured I couldn’t put off this project any longer. So Olivia and I started digging through desk drawers and envelopes and began the monumental task of chronicling almost eight years of her life. It proved too daunting. We needed a new strategy.

Instead of starting at day one of her life, we started at day one of kindergarten, which was actually more fun for her. We found photos of her with her friends and her teachers, photos from Halloween and birthday parties, photos of vacations and photos of nothing in particular. By the time we had finished three pages, complete with stickers and hand-written commentaries, she had had enough and I had realized that maybe this project was going to be a lot more fun than it seemed at the get go. (I’ve promised to backtrack and complete the infant and toddler portions of her life another day — or decade.)

So the album is back on the dining room table, waiting for us to add pages for first and second grades, something we hope to complete over the current school break. And when this baby is finally complete, Olivia will be the only child in our family to have a true scrapbook. Not bad for a middle child. Now if only there was a way to make up for all those infant and toddler singing and tumbling classes she missed out on…

August 6, 2017 • family
My annual tribute to the baby I lost, the baby I call Grace: For the past few days I’ve been looking at the numbers on the calendar, growing more and more ...
Read More