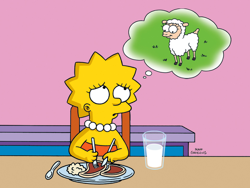 I always figured that at some point one of my children would probably decide to give vegetarianism a try. I don’t know why. Maybe because I’ve told them repeatedly that I  was a vegetarian for a long time and that if I wasn’t cooking for a family of carnivores I would be a vegetarian again. Maybe because none of them really love meat — except for hot dogs and bacon, which seem to exist in their own food universe. Maybe because I knew that one day the issue of killing animals for food would eventually strike a chord with someone in my clan. Bingo. Maybe number three wins.

Olivia decided this weekend that she wants to be a vegetarian, which, I have to admit, filled me with pride. The fact that she would even take the time to consider not eating meat made me look at her in a new light. My little girl is still a little girl, but she’s a little girl with a lot going on in her head. That’s never a bad thing. So I encouraged her and tried to explain that even though being a vegetarian is a noble choice, it is not an easy choice. We live in a meat-centered society, with meat-loving friends who don’t like to see us going against the grain. Would she be ready for that?

Her first test came on Memorial Day, when the American Legion Hall in our town served up the usual feast of free hot dogs and soda for all marchers. She and some Brownie friends stood on line with me. When we approached the table, I asked her what she wanted to do. She said she would just get a drink, but her friends started asking questions, telling her all the things she wouldn’t be able to eat as a vegetarian — chicken nuggets, hamburgers, hot dogs — and pushing her to explain Why? Why? WHY? did she want to do this. She said it’s because she doesn’t want animals to be killed for her food. Tough talk for a 7-year-old.

She later asked me if she would ever be able to get a Happy Meal again  — something we rarely get them anyway — and I said that she could and we would just give the chicken nuggets to Noah, who has shown absolutely no inclination toward vegetarianism. Eventually we will work up to the idea that not buying the Happy Meal at all is part of this decision, but the Happy Meal isn’t about the meal for Olivia; it’s about the toy. For me the Happy Meal obsession is just one more reminder of the culture we live in, where kids are encouraged to eat bad food in order to get equally bad toys that get dumped in a closet or bin minutes after the french fries are gone. Same goes for the whole hot-dog-as-reward mentality. There was a time when we simply didn’t allow our children to eat hot dogs, especially free hot dogs from God knows where, but when hot dogs are offered as prizes at special events and parties and summer picnics, it’s hard to force your kids to just stand there with an empty bun time and again.

As someone who has experienced the pressure put on vegetarians to conform, I can only imagine how much harder it will be for Olivia if she really decides to stick with this. I never had to contend with friends at school or birthday parties where I couldn’t eat what was being served, although I did have to deal with office mates sneering at my lunches and pushing me to give up on all this silliness. Fortunately, Olivia has another classmate who is a life-long vegetarian, so this choice won’t be something new to the kids at school.

We went to the library yesterday and took out some children’s vegetarian cookbooks. We’re talking about making good choices, that you don’t replace meat with empty calories, that you need to get protein from other places, which means eating things she sometimes tries to avoid — like those cannellini beans that hide in the kale and pasta dish I often make.

No matter what she decides for the long term, I think this time of exploration will be a really good thing for her. It’s got her thinking about what she’s putting into her body, and it’s forcing her to stand up for something she believes in even when others don’t necessarily agree. I think it will make her a stronger person in the end, not just physically stronger but emotionally stronger as well.

I had decided just a couple of weeks ago, after my glowing colonoscopy report, that the only meat I would eat — and on a very limited basis — would be chicken. But Olivia has inspired me to go all the way. In solidarity with her, I have, once again, given up meat, although we are both going to continue to eat fish, making us pesca vegetarians. It’s funny, but in just two days I have seen a shift in how we are relating to each other. We are talking about issues that matter. We are doing new things together. We are side-by-side on this, like two peas in a pod.