Entering the silence of Genesee: Part 1 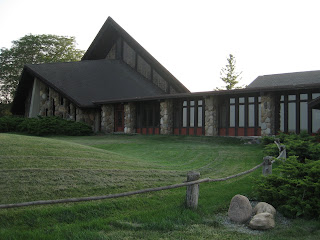 I returned late yesterday from my private weekend retreat at the Abbey of the Genesee in Piffard, N.Y., where I was privileged and blessed to pray the Divine Office and attend Mass with the Cistercian monks who call this abbey home. To be honest, I’m not yet to the point where I’m ready to ramble on and on about my spiritual experience. Silent retreats are like that, at least for me. I want to hold onto that spirit of silence for as long as I can, even in the midst of the chaos of normal life. Right now, spending too much time trying to write my experience when I’m still trying to absorb it all would somehow corrupt the beauty of what happened there. And so much of what happened there is invisible, indescribable and still unknown to me. So I’ll try to tell you a bit about the retreat in pictures and descriptions, and then throughout the week I’ll be back with reflections and observations.

The photo above is a shot of the front of the abbey, which is a beautiful stone and wood structure where the monks graciously welcome visitors to join them in prayer. The abbey was founded from the famed Trappist Abbey of Gethsemani and is the location written about by Henri Nouwen in The Genesee Diary. 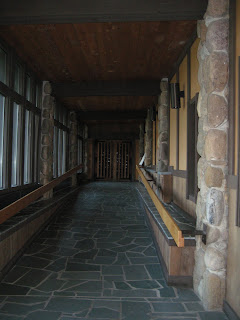 I arrived on Friday afternoon and got my first taste of monastic prayer when I attended Vespers at 4:30 p.m. When you walk through the front door of the abbey, you can turn right to go to the bookstore, bread store (more on that another time) and sitting area where you can rest and look out at the magnificent view. If you turn left, you go down the hallway seen in the photo to the left. This leads to the chapel. Strict silence must be observed once you enter the hallway. Through those doors is the beautiful chapel, with its wood ceiling and stone walls.

Inside the chapel, guests are invited to sit in the stalls facing the monks, separated by a low iron gate. The circular altar is in the center. What a gift to be allowed into this space and to chant the Office along with the monks. A bell rings, the monks rise, one of them knocks on a wood stall to signify it’s time to begin and then the low, haunting melodies of the ancient prayers take over. 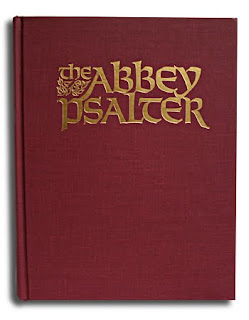 We used the beautiful Abbey Psalter (seen here on the right) to pray throughout the day.

I loved each of the hours for different reasons, but if one stood out, it was Compline, specifically for the end of the hour when the monks turn to face an icon of Mary holding Jesus and chant the Salve Regina. The darkened chapel, two candles flickering under the icon, monks chanting. Can it really get any better than that? Well, perhaps only when you add to it a walk back from the abbey to retreat house just as the sun dips below the corn fields and the horizon right before your eyes.

I managed to make it over to Vigils at 2:25 a.m. on Sunday morning, which, of course, was spectacular for the very fact that while the rest of the world was sleeping, we were softly chanting.

Our retreat guest house was about three-quarters of a mile from the abbey, down a hill and then following a long stretch of field alongside a fairly busy country road. I often found myself wondering where all those pick-ups were speeding off to in the middle of nowhere.

Summer came on full force this weekend with temperatures hovering around 90 all day and well into the evening and no air conditioning. Anywhere. It was more than slightly uncomfortable, and I will admit that Friday was a rough entry period for me. I kept wishing it would be cooler, and then realized part of this retreat would be surrendering to what was instead of wishing for what wasn’t. Once I accepted the fact that I’d be dripping with sweat for the next 48 hours, things got much better. (Of course, next time I’ll plan for later in the fall or early in the spring.) I figured that with all my trips back and fourth to the abbey for various hours and then my five-mile walk along the greenway behind the retreat center, I clocked about 10 miles of walking on Saturday alone. Good thing I threw in those hiking boots at the last minute.

At the retreat center, I was assigned the “Hermit Room,” so named because the guest who gets this room can remain even more isolated than the other retreatants. 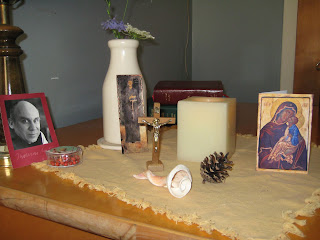 Although it was much more sparsely appointed than the other guest rooms, it had a private bath/shower and a comfortable rocking chair. I set up my own little sacred space on the desk of my cell. You can see it over there on the right, complete with crucifix, battery-powered candle, a pine cone I found on a morning walk, a copy of the icon from the abbey chapel, St. Francis, Thomas Merton, prayer books, Rosary beads, and some Queen Anne’s Lace I picked on my long walk. The shell is obviously from a beach very far from Piffard, but seashells are always part of my sacred space.

Now, if you thought I was kidding about that Hermit Room label, please take a gander at my bed, which appears to be either a short picnic table or a large coffee table with a mattress on it. It was as hard as a board because it was, in fact, a board. (Other guest rooms had typical mattress/boxspring beds.) When I first saw this bed, I groaned. Out loud. Which you aren’t supposed to do on a silent 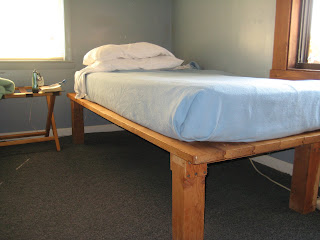 retreat. But I will admit that I slept quite soundly, so I guess all that walking paid off.

I didn’t spend a whole lot of time in my room anyway since I was either up at the abbey or out on the lovely retreat center grounds or in the small chapel inside the guest house, which was a nice place to pray late at night when I wanted some quiet prayer time without heading out into the darkness. I did that once and decided against it after that. On Saturday morning, at 5:30 a.m. I grabbed my flashlight and reflective vest and walked alone and in total darkness up to the abbey. Longest three-quarters of a mile of my life. I started with my guardian angel and moved right into the Rosary. I didn’t have beads. I wasn’t even counting. I was just saying Hail Marys and Our Fathers as fast as I could, as if rushing the prayers would get me to that abbey faster. I saw the shadow of at least one large figure lope through my flashlight beam. I’d like to think it was a deer. And then one smaller animal. I opted for imagining a bunny or groundhog over skunk or rabid fox. When I finally saw the beautiful Asian-style lanterns of the abbey, I breathed a sigh of relief and vowed to drive whenever darkness was part of the prayer equation.

I’ll bring you more photos and thoughts on my retreat in the days to come, but for now here is a brief video clip of one short piece of my walk to the abbey. It’s the last stretch of hill before the abbey comes into view. Forgive the bright sun in your eye; it was almost dusk and the sun was getting pretty low. This clip is not nearly as compelling as Into Great Silence as there is no melting snow, dripping water, or feral cats, just me breathing as I hike up the hill and some occasional crickets chirping in the background. Click the play button below:

December 4, 2022 • Advent
My Catholic News Service column for the Second Sunday of Advent. (The image is me offering an expanded version of this message as a reflection at Mass during ...
Read More