Crossing over, moving on 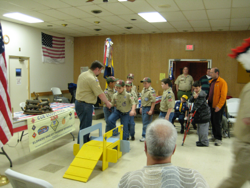 Noah left the pack last night, the Cub Scout pack, that is, putting his Webelos rank behind him in exchange for his new rank as a full-fledged Boy Scout. As he prepared to cross over the bridge, his den leader asked him to remove his Cub Scout neckerchief as a symbolic leaving behind and looking forward. I found it all very moving. This was the first of many “graduations” that Noah will experience over the coming months and years. First he leaves Cub Scouts, then he leaves his elementary school years for the junior high years. I don’t need to remove a neck scarf to realize that I too am crossing over to a new place as the mother of an adolescent, even if Noah will forever be my baby boy.

This year has been a year of changes for Noah in all the best ways. Although he can still fight with Olivia at the drop of a hat and he has not yet mastered the art of making a bed, he has taken on new responsibilities and new interests, something that I think is due in large part to the amazing teacher he had this year, Scott Young. More was expected of him, more was offered to him, and Noah rose to the occasion as evidenced by his grades, his behavior, his demeanor. As I watch him now, I sometimes feel as though I am getting the first real glimpses of the man he will become, and it is at once reassuring, exciting and, I have to admit, a little bit frightening. Where does the time go, and where will it take us next?

August 5, 2017 • family, Noah, parenting
Dennis and I were sitting around the kitchen table one morning talking with our son, Noah, who is home from college for the summer and working full time for ...
Read More