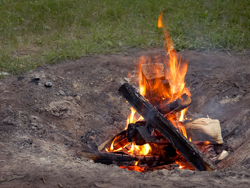 So we made it through our brief camping trip none the worse for wear. OK, maybe a little the worse for wear, but that was to be expected. Considering the fact that the temperature was in the 90s and we had to sleep six girls and six moms in a smelly, dirty “nature center,” complete with a dead mouse found upon our arrival, the trip went amazingly well, at least from my perspective.

I went into this trip with only two previous camping experiences behind me, both of them Girl Scout trips and both of them horrendous in my memory. They are the reason I have declared on more than one occasion that my idea of camping is staying at a Motel 6 or its equivalent. Visions of mud-covered sleeping bags during that rainy tent trip still dance in my head whenever I hear the word “camp.” But I knew when I signed on to be a Scout leader that camping would be in my future, so I decided to go into this with a let’s-wait-and-see attitude, and it served me well.

In fact, I would go so far as to say that this experience has made me re-evaluate my childhood experiences. After all, cooking French toast in a mess kit frying pan on top of a coffee can was pretty cool, and it is one of the few concrete fourth-grade memories that remains vividly etched in my brain. So maybe it wasn’t the camping experience itself that was so horrendous but my decision to fold my arms and make the worst of it.

We had a lot of that on this weekend’s trip, not just from the girls but from the moms as well. The result was that most of our Brownies now have the same reaction to the word “camp” as I had all those years ago, and I really didn’t want that for my Scouts and especially not for my daughter. I wanted her to see that she could do anything she set her mind to, even if it entailed using latrines, removing ticks, and sleeping in what was billed as “a very rustic cabin.”

I don’t want Olivia and the rest of my Brownies to leave Scouting one day with a negative reaction to the great outdoors. I want them to make their peace with camping, and maybe even find a way to like it because, when all is said and done, there is something incredibly restful and beautiful about watching a crescent moon rise in the sky over your campfire.

I will grant you, however, that there is nothing incredibly restful about waking up at 3 a.m. to hear an animal clawing at the cabin screen. Yes, that happened this weekend. I was the only one awakened by the noise, which I’m hoping sounded much bigger than the actual creature making it. I started out thinking bear and worked my way down to raccoon as I sat there feeling around for my glasses and trying to figure out how to get one of the oars from the other side of the cabin to use as a weapon without stepping on the heads of my sleeping Scouts. Don’t ask me what I planned to do with the oar if a bear came walking in.

In our camping postmortem, I sat down with Olivia and reminded her that the weekend wasn’t all bad, that one day she would look back and remember making grilled cheese over a camp fire and searching for “clues” in the game she and her friends created, and overcoming their fears as they settled into sleeping bags with bugs flying around and noises crackling in the distance. I know I will forever have memories of this weekend and the crazy things that kids do, things that had me laughing so hard I was almost crying as I lay there in the heat trying to decide if I would rather be cool or protect myself from whatever might come scampering across the room.

When I arrived home, I was exhausted and sweaty and smelly and covered in bug spray and sunscreen, but I have to admit that I was satisfied with myself for facing my fear and making the best of it, and I was proud of Olivia for doing the same. I actually told Dennis that I want to buy a tent and take the family camping this summer so that we can show Olivia that camping can be fun, even if it is always a little gross.

It may have taken the better part of a lifetime, but the Girl Scouts have finally made a camper out of me.