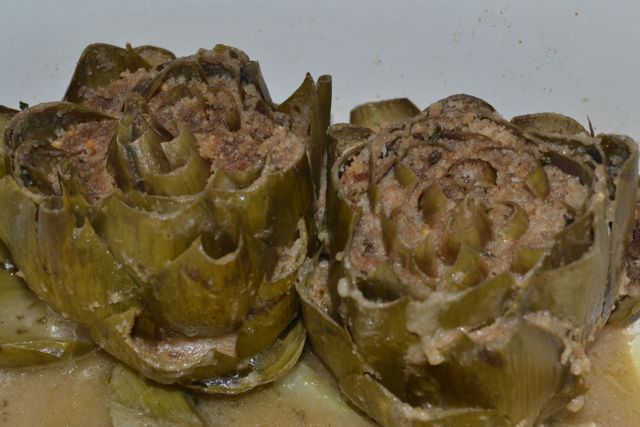 So today’s food post is going to be a little vague because, as far as I’m concerned, making stuffed artichokes is a little vague. I follow my grandmother’s general “recipe,” which means there are no measurements. It will be a cooking adventure, you’ll see. Just be sure to pack lots and lots of oil.

Artichokes, however many you want. (Buying artichokes is often hit or miss, depending on the season or store. Don’t buy them if the leaves are opened up. You want the leaves to be tight to the choke. Side note: When I went to Rome, I desperately wanted Artichokes alla Guida and Artichokes alla Romana. I could get neither because they weren’t in season. They are serious about eating according to the seasons over there. Gotta love it.) But I digress. As usual…

Olive oil. A ridiculous amount. And then a little more.

Seasoned bread crumbs. A few cups, depending on how many you’re making, say, at least four, right?

Pull off the tough outer leaves of the artichoke. Then trim the tips off the artichoke leaves. Cut the stem off the choke, leaving a nice flat bottom so it sits even in the pan. Peel the stems and save them. They’re delicious cooked right alongside the artichokes. Rinse the artichokes and drain them upside down while you get everything else ready.

Get a nice big pot (I’ve also done this in a slow cooker, but I prefer the stovetop method). Throw the stems and three or four slightly crushed garlic cloves into the pot.

Now, take the artichokes and spread the leaves open a bit. Over a plate (so you don’t make a complete mess), pour bread crumbs into the artichoke and tap it a bit to force the breadcrumbs down. Then top it off. Try to get a nice amount of breadcrumbs evenly distributed among the leaves, but not too much. Otherwise the result will be too bready. Trust me, I know this from experience.

Stand the stuffed artichokes in the pot. Take the olive oil and give each choke a good dousing. When you think you’ve drizzled enough on, let it sink in and then do it again. Really. Do not skimp on the oil.

Carefully add water to the pot to come about one-quarter or one-third the way up the artichokes. Don’t let the water get into the chokes. Toss a little salt into the cooking water.

Put the cover on, but with a slight tilt to it and cook for at least one hour. Stick a fork into the center. If it goes in easily, it’s done. If not, continue cooking for a while more. You’ll know. You’ll be able to easily pull off a leaf and test it. (The best part.) Serve hot or at room temperature.

If you’ve never eaten an artichoke, I’m not sure I can help you here without some sort of video demo (Wouldn’t that be entertaining?) In my family, putting an artichoke down in front of a non-Italian at a big family meal was sort a tradition, like hazing. Here’s a quick description of how it’s done:

Pull off a leaf, turn it over, put it between your front teeth and gently pull, so you get all of the stuffing and the top layer of the inside of the artichoke leaf. You don’t eat the leaves, until you get way far into it and then they may be so tender that you can’t resist eating the whole leaf. BUT, when you get too far to the center, the leaves will get prickly. Stop. Pull out the actual choke and carefully cut off the bottom unprickly layer of absolute deliciousness. I’d dare say that bottom piece is my absolute favorite part of the artichoke. Yum. Let me know how this works out for you. Oh, and be sure to have lots of napkins on hand.

Have you hugged your colon today?

March 15, 2018 • Uncategorized
It's mid-March, and that can mean only one thing on this blog: It's National Colorectal Cancer Awareness Month. That means it's also time for me to parade ...
Read More