Foodie Friday: Hollow chef kicks it up a notch 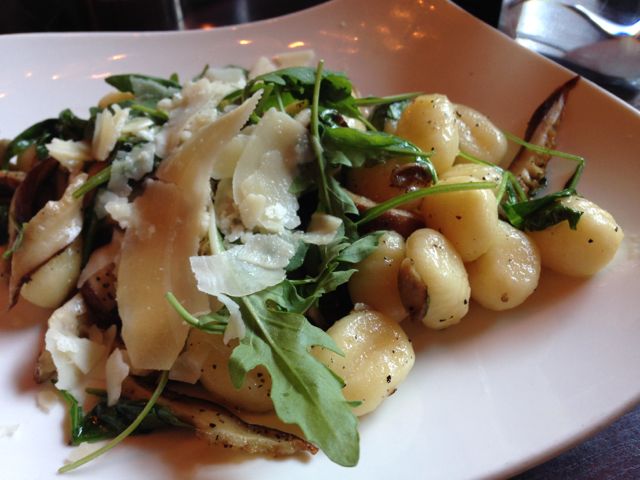 When we were planning our date night this week, there was only one place on my list of suggestions: The Hollow Bar & Kitchen on North Pearl Street in Albany. I was craving the eggplant stack, which I’d had the first time we visited. I don’t care if you think you don’t like eggplant, you will love this. Trust me. It. Is. Incredible. So off we went, in search of eggplant and gnocchi and craft beer and wine.

The bar/restaurant is also known as a music venue. The bar side has quite a different feel from the restaurant side and apparently gets quite crowded on music nights. Both times we have visited on a Wednesday, when it’s fairly quiet, with just a few tables occupied inside and — because it was a lovely night — out front at the sidewalk tables. I prefer the 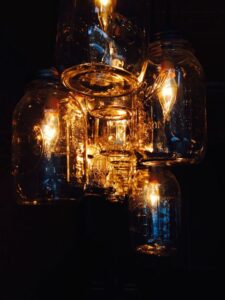 inside tables no matter what the weather because I love the warm-toned brick interior with the mason-jar light fixtures and, on this particular night, fresh sunflowers on every table.

I went ahead and ordered the eggplant stack, as planned, with a half-order of the signature gnocchi. Dennis ordered the tuna special, which was served over homemade gnocchi with arugula and heirloom tomatoes. While we waited, I ordered a flight of wine and Dennis ordered a flight of craft beer. Our waiter was incredibly helpful in helping us pick out just the right selections from the very long craft beer list and the shorter but excellent wine list.

And then our food arrived. I took one bite of my fried + roasted eggplant stack and — cue angels singing — knew there was something different going on there. “I can’t believe it, but this is even better than the first time I had it,” I told Dennis. There were breadcrumbs involved this time, although I wasn’t quite sure how. We’re talking about layers and layers of seasonal vegetables, tomatoes, mozzarella, pesto. You can see it down there on the left, but the photo doesn’t do it justice. Just go order it. Today. This weekend. Soon.

To top it off, the signature gnocchi was so incredible, soft little pillows of dough tossed with truffle oil, brown butter, arugula, shitake mushrooms and shaved asiago. I have vowed to make the gnocchi dish my main meal the next time I visit. Which will be very soon. And let me just tell you that ordering both the eggplant and a half-order of gnocchi is gluttonous. I mean, you will see these plates coming out and

wonder what army you’ll be feeding. I took home at least half of each dish. The gnocchi reheated perfectly for lunch yesterday, and the eggplant is on the menu at home today. Dennis’ tuna special was equally delicious, he said. The last time we were there he had the surf and turf burger, which he loved. So The Hollow is batting 1.000 in our book.

About halfway through our meal, chef Henry Ciccone (who was nominated in the “Rising Star Chef” category for the 5th Annual Albany Chefs’ Food & Wine Festival, came out to talk to us and ask if we liked our meals. I told him the eggplant was even better than before and his face lit up. Panko. That was the secret. Some fresh panko from somewhere in the local region (I can’t remember where he said). He decided to give it a try in the eggplant and now was considering making the change permanent. Henry came out a second time to talk a little more. That’s when we found out his father works at Kripalu Center for Yoga and Health in Lenox, Ma., and that Henry had just been there on retreat. I am a big fan of Kripalu, having been there on retreat myself a couple of years ago. Cosmic connections. Always.

I’m heading back to The Hollow soon so I can give Henry a copy of my book Cravings, since Kripalu actually makes it into that book. And maybe to get a full order of his signature gnocchi.

Here’s a link to the menu so you can start dreaming about what you’ll order.

Have you hugged your colon today?

March 15, 2018 • Uncategorized
It's mid-March, and that can mean only one thing on this blog: It's National Colorectal Cancer Awareness Month. That means it's also time for me to parade ...
Read More