Pope Francis: Why He Leads the Way He Leads. And how you can learn to lead like him. 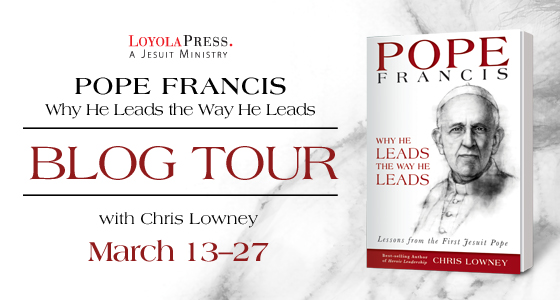 After Pope Francis recently shared the story of reaching into his confessor’s casket and stealing the cross off his Rosary beads, I sent my husband, Dennis, this email message: “Every time I think I can’t love this pope more, he says something crazy and ups the ante.” And that is absolutely the truth. From the moment Pope Francis stepped out onto the balcony, waved to the crowd and asked for a blessing, I knew – I think we all knew — this man was someone special. Almost every word and action after that has built on our initial hunch. I have often said that if ever I needed proof of the Holy Spirit alive and well in the Church today, the election of Pope Francis is it.

But how has this seemingly simple, albeit brilliant, man managed to change things so dramatically without changing any specific teaching at all? One year ago, who would have guessed we would see the pope featured on the cover of Rolling Stone – and Time and Vanity Fair and The Advocate? It was unthinkable just a few short months ago, and yet here we are. How did we end up here?

In his new book, Pope Francis: Why He Leads the Way He Leads, author Chris Lowney unpacks those questions and not only shows us how Pope Francis became the leader he is today but how we can bring some of those leadership qualities into our own lives, whether we are CEOs, parents, pastors, mechanics, parish council presidents, or anything in between.

Chris is a former Jesuit seminarian, a former director at J.P. Morgan & Co., and current head of Catholic Healthcare Initiatives, so he’s got a lot of bases covered when it comes to understanding Jesuit spirituality and corporate leadership combined. He lays the groundwork by taking readers through the Spiritual Exercises that form all Jesuits, including Pope Francis, in a clear and unintimidating way. In fact, it’s so well done, I guarantee you’ll be wondering how you can get a month off — or at least a week — so you can do your own Ignatian retreat.

In the pages of this book, we begin to get a glimpse of what makes Pope Francis tick and why he has become such a beloved figure in such a short time. Namely, he leads by showing. He has “dirty feet,” as Chris writes, sharing stories from people who knew him back in the seminary and can attest to the fact that Pope Francis has never been above it all. He has always been willing to live “with the smell of the sheep,” as he has challenged priests and bishops to do.

As I read this book, I found myself thinking it should be required reading for every pastor. Then I quickly expanded that to every priest and every member of a parish staff. Before long the list grew to include diocesan staff, new college graduates, my teenage son, my husband, and just about everyone I know who is Catholic and wants to be  a.) a better boss  b.) a better employee  c.) a better parent  d.) a better student  e.) a better parish leader  f.) a better person. Yeah, pretty much everyone.

Early on in the book, when Chris talks about Pope Francis’s personal credo, something he wrote before his ordination to the priesthood but has kept with him to this day, he gives readers a challenge: “Record in about 200 words, less than a page, your deepest beliefs and aspirations about yourself, your key relationships, humanity, God, and your role in the world.”

I dare you to take up that challenge this Lent. And then, as Chris suggests, take it out every few years and re-read it to see what’s changed.

Pope Francis: Why He Leads the Way He Leads offers readers a balanced approach to leadership in everyday life, reminding us to accept our flaws and to strive to be our best self in spite of them, to “plunge in” and be willing to do the same hard work we ask of those on our team (or in our family), but to remember to take a step back and withdraw into prayer and silent reflection, to carve out time from our busy schedules to see where we’ve been, where we’re going, and what we might be missing along the way.

“Our life is a journey, and when we stop moving, things to wrong.” The final chapter begins with those words of Pope Francis from the day after his election in 2013. So much of Chris’s book focuses on this theme of journey, directly and through stories and anecdotes, interviews and examples. Life is a journey, leadership is a journey, faith is a journey. Nothing is static, really.  But how and whether we choose to embrace that journey and adapt to the hills and valleys we find along the way will determine how we lead, how we follow, how we learn, and how we teach.

Implicit in Pope Francis’s journey imagery is an important conviction. Outsiders would consider the papacy the pinnacle of the Catholic clerical profession: a destination, the end point of a lifelong quest. But Pope Francis, who rails against careerism as leprosy, sees it merely as another step on a journey, a shared journey no less, between leader and led, or, more accurately, between leader and companions. When greeting the world for the very first time as Pope Francis, out on the balcony of St. Peter’s, he said, “Now let us begin this journey.” That wasn’t the “papal we”; “us” really meant us. Pope Francis looks forward to what we might build together.

As I finished up Chris’s book and posted on Facebook about the blog tour, I heard from a priest I know – vicar general in his diocese – who told me that his bishop loved this book and gave him a copy as well. I took that as a great sign. Many people see Pope Francis and love what he’s doing but wonder how that’s going to translate and trickle down to the day-to-day life of parishes back home. If people are reading Chris’s book in an effort to adopt Pope Francis’s leadership style, we may start to see changes in our local churches sooner rather than later, and to that I can only say, Amen!

Tomorrow the blog tour heads to Catholic Business Journal. Be sure to check that out.

“Learning to Pray in Scripture” a practical prayer tool

October 2, 2014 • book review
Author Stephen Binz combines the ancient practice of Lectio Divina with theology, history, and Scripture as it relates to the Catholic Mass in a ...
Read More

February 21, 2012 • book review, Books
From my post at OSV Daily Take today. Follow the link at the end of this post to leave a comment and enter the book giveaway.Paula Huston’s beautiful new ...
Read More

Review says my book could be a ‘textbook’ for Catholics. Cool.

April 5, 2011 • book review
I just came across this amazing review of my latest book, "The Essential Guide to Catholic Prayer and the Mass." I have to say, it's my new favorite review. ...
Read More