‘What kind of blessing was that?’ The best kind. 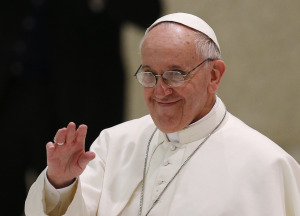 I have to run out and sell some Girl Scout cookies this morning, so I can’t write the pope post I’d like to write just yet. I’ll be back later or tomorrow with that. So for now I’d just like to leave you to ponder this one quote from Pope Francis’ meeting with the media this morning. Read the whole story over at the CNS Blog (photo from CNS):

After personally greeting dozens of journalists and representatives of the Vatican press office, the Pontifical Council for Social Communications, the Vatican newspaper and Vatican Radio, the pope came back to the microphone.

“I know that many of you are not Catholic or are not believers, so I impart my heartfelt blessing to each of you silently, respecting your consciences, but knowing that each of you is a child of God. May God bless you,” he said.

Wow. Thank you, Pope Francis, even if, as John Thavis reported, some folks in the audience complained: “What kind of a blessing was that?”