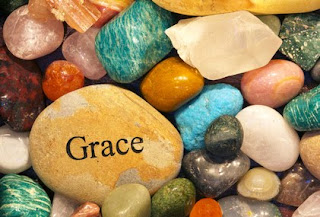 A few things have happened in these first few days of 2011 that make me believe that either a.) This is going to be a very good year, or b.) I am looking at the world through gentler, more welcoming eyes.

First was New Year’s Day, the day Noah, our oldest, was born 14 years ago, which also happens to be the day that my paternal grandmother, affectionately known to all as E-ma because of a nickname I came up with when I was little, was born 98 years ago. But, for various reasons, I couldn’t be with my grandmother on her birthday, so I felt a little sad over that.

We decided to go to 5 p.m. Mass on New Year’s Day, but I was handling hospitality, so Olivia and I went over to church early, set up and figured we’d meet up with the rest of the gang inside. Minutes before Mass was about to start, we tiptoed up the center aisle to our usual spot in the one of the first few pews. I saw Noah at the end of the pew and Dennis and Chiara toward the middle, but who was that old lady sitting between them? Dennis shrugged his shoulders as I approached.

I sat down and smiled at her and she nodded, still not aware, I don’t think, that she was sitting in the middle of a family. Then Olivia climbed over her and Chiara tried to get to me and she had her “aha” moment. She asked if she should move, and I said, “No, you can be part of our family tonight.” Dennis whispered something to me and the lady looked at me and said, “My name is Mary too.” Another big smile. Mass began and Mary was singing her heart out beside me. A few minutes into the opening prayers, I found myself alternately smiling and on the verge of tears. I had my birthday boy on one side and there, on my right, a surrogate grandma filling in for my own.

The woman’s actual granddaughter showed up and sat in the row behind us and, at the Sign of Peace, I reached over to tell her how happy I was to have her grandmother sitting with me and why. (I can squeeze a lot into the Sign of Peace.) I think that made her happy, and maybe made up for the fact that she was supposed to attend Mass with her grandmother and ended up sitting behind her? Anyway, that was one of my first moments of grace this year.

The next day I went back to my first yoga class in a long time. I knew I was taking a chance because it was not a beginner class and I was too out of shape to be attempting anything more intense. But I settled onto my mat. Within minutes of beginning the class, I felt my shoulders relax and tension melt and peace flood into my heart, and I knew I was home (even in a sweaty YMCA studio). I wax and wane when it comes to my yoga practice, but standing there on that Sunday morning with 50 other people, I felt — for the second time in 24 hours — that deeply spiritual sense of community that comes when people join their hearts and minds, and, in this case, bodies in an effort to move forward physically, mentally, spiritually.

My next moment of grace came the next day when yoga class did not go as well. Obviously I was right when I guessed that attempting the athletic yoga class after months away was too much, and my body was rebelling. As I attempted a simple stretch, my elbow screamed in pain. Not being one to want to admit defeat, I struggled through the class, wondering what could be wrong. (The friend who came with me reminded me that it could just be because we’re getting old. Thanks, Michelle. The truth hurts.)

I came home and iced it and rested it on a pillow, admitting that I would have to skip any exercise the next day. And I could feel the tension beginning to rise as I fought back disappointment over my scuttled plans. But slowly, maybe during the night and certainly by this afternoon, I felt a realization that it was okay. (Thanks, Scott, for reminding me that listening to my body is more important than striking a difficult pose.) My body is telling me to slow down, forcing me to focus not on being “the best” or even at the top of my class but on the journey at hand. Gains don’t have to be made all at once. In fact, they rarely are. Bend with the obstacle, rather than break trying to beat it. So, here I am, in a little bit of pain — especially when typing or writing — but at peace with my middle-aged elbow and the fact that I just can’t do all that I once did with as much ease. Then again, it’s not all about the physical stuff, is it?

Finally — And it’s only “final” in this post. I’m hoping for many more grace-filled moments this year — I began reading a book that seems as though it was meant to be placed in my hands at precisely this time. “Prayerfulness: Awakening to the Fullness of Life” by Robert Wicks (Ave Maria Press) came to my attention by accident, or so it seemed, as I flitted around Facebook one day recently. My publisher sent me a copy (Ave also published my Walking Together book), and I just began reading. It is a perfect fit, considering where I was spiritually at the end of Advent and where I am now. It’s filled with great stories, sage advice and practical spiritual suggestions. I plan to post more on the book once I finish it. Still, as I read it and nod my head, I feel more and more grace and peace and stillness settling in. And that’s a very good place to be at the start of a new year.