The Zen of snow shoveling 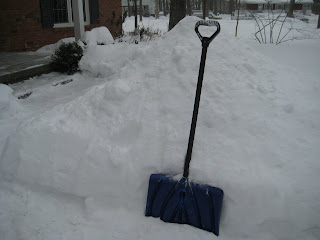 I just finished shoveling out our driveway. It started as an effort simply to get through the icy snow bank left by the plow at the end of the driveway so I could get the van out and pick up Noah from school. (I was afraid he’d get hit by a car or plow while walking home from the bus stop.) When I got home, I decided to continue where I left off and just kept shoveling.

We have a gas-powered snow thrower, although I have to admit that I’ve never used it. Dennis does all the snow throwing, and leaf blowing. I prefer the old-fashioned way — shoveling and raking. There is something very meditative about both chores. They are, in a sense, very zen. You shovel snow while snowflakes fall covering up the space you just cleared with more snow. Same thing with autumn leaves. If you’ve ever raked a yard in the northeast, you know that raking can be an exercise in futility. Your efforts are quickly lost in a swirl of brown and orange and red.

Noah was not so charmed by this zen twist on shoveling. He just stared at me with that 14-year-old look. So I tried another approach, as he struggled to help with the snow removal. I suggested that knowing how to shovel a driveway might come in handy if ever he had his own place and no snow thrower to get the job done. Still not impressed. Finally I gave him some pointers on the art of shoveling and told him he should take pride in his work. “In shoveling snow,” he asked, incredulous. Yes, even in shoveling snow. Or maybe, especially in shoveling snow.

So the driveway is clear. For now. It was a nice little exercise — mental and physical — on this day when I couldn’t get to the Y. But it’s even nicer to know that Dennis will be around to handle that big snow tomorrow.

Week 5: Connecting with nature, even a snow storm

February 1, 2021 • Cravings Tribe
Okay, so we skipped Week 4 here on the blog. I have to apologize. I was not taking my own advice and was allowing myself to sink into a bit of darkness and ...
Read More