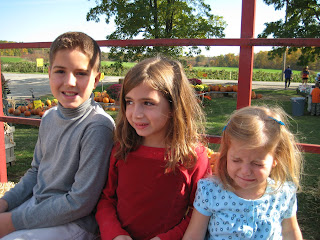 We decided to pick our own pumpkins at Stanton’s Farm in Feura Bush today. The farm, which is owned by a lovely family from our parish and Catholic school, is just a few minutes from our house and, as you can see from the photos (including the header photo at the top of this blog), the weather and the fall foliage were just perfect. Chiara, on the other hand, was not so perfect. See photo above. She loved the hay ride to the pumpkin field but refused to admit it on film. 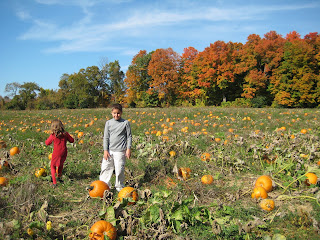 We found a great pumpkin, as well as some gourds and Indian corn. I’ve never picked Indian corn right from the stalk before. Very cool. We also brought home a big corn stalk for the front porch and a bale of hay, which we use first for Halloween decorating and later behind our outdoor Nativity scene. It’s all very upstate New York, which I am just loving more and more these days, in case you haven’t noticed. The kids had a great time in the corn maze and even more fun in the hay maze, which really did stump us a few times, leaving us staring at a wall of hay while we tried to find a way out. The hay slides were also a big hit with everyone except Chiara. See photo below if you don’t believe me. She was not amused by the long, dark tunnel slide or the big kersplash into a pile of hay at the bottom. Once was definitely enough for her. 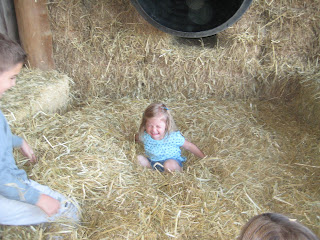 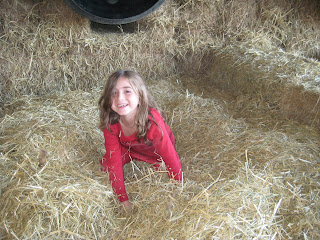 We headed home with a bag of cider donuts, which we have all declared the best cider donuts ever. I have promised to get the kids at least one more batch before the season is out. They’re that good.