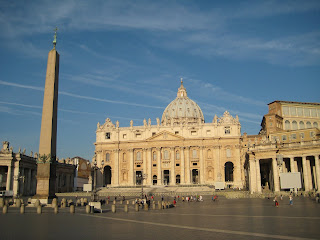 When I went to Rome in September, my watch stopped working on my first day in the Eternal City. My initial reaction was to run out and, through pointing and gestures and lots of “grazies,” try to buy a new one. Then I decided to take the Roman approach and not worry so much about time.

Turns out I never had to worry at all. St. Peter’s Square is equipped with its own sundial, as well as markers to indicate the solstices and even the days when the sun enters various signs of the zodiac.

From a CNS story by Carol Glatz:

Hidden among the paving stones of St. Peter’s Square there is a simple clock and calendar. All you need is a sunny day.

The 83-foot stone obelisk in the middle of the square acts as a sundial that can accurately indicate midday and the two solstices thanks to a granite meridian and marble markers embedded in the square.

Pope Benedict XVI proudly pointed out the hidden timepiece during an Angelus address he gave on the winter solstice a few years ago.

“The great obelisk casts its shadow in a line that runs along the paving stones toward the fountain beneath this window and in these days, the shadow is at its longest of the year,” he told pilgrims from the window of his library.

A long, thin granite strip running from the obelisk toward the pope’s window and through one of the fountains acts as the meridian: a line that indicates when the sun has reached true or solar noon and is at its highest point in the sky.

The pope, in his solstice soliloquy, reminded people that the church has always been keenly interested in astronomy to help guide and establish fundamental liturgical days and the times of prayer such as the Angelus, which is recited in the morning, at noon and in the evening. While sunrise and sunset are easy to figure out, sundials could accurately tell midday, he said.

The CNS story also points out that at the Basilica of St. Mary of the Angels and Martyrs, Pope Clement XI even had an astronomer build meridians to mark not only the noon hour but to “to make highly accurate celestial observations and solve complex astronomical problems.”

More from the CNS story:

John Heilbron, emeritus professor of history at the University of California, Berkeley, told Catholic News Service that St. Mary of the Angels “could do things you couldn’t do with telescopes at the time” like find out precise information about the inclination of the Earth’s axis.

Heilbron, who wrote “The Sun in the Church: Cathedrals as Solar Observatories,” said the basilica’s meridian was also used “to establish a very good value for the length of the year.”

It’s fascinating stuff. And the facts once again give lie to the argument that the Church is opposed to science. Read the full story HERE.

Week 5: Connecting with nature, even a snow storm

February 1, 2021 • Cravings Tribe
Okay, so we skipped Week 4 here on the blog. I have to apologize. I was not taking my own advice and was allowing myself to sink into a bit of darkness and ...
Read More