Standing up for vocations 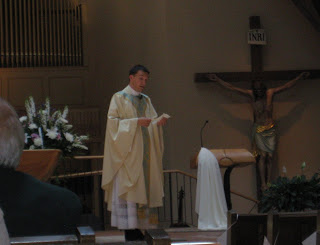 On Sunday, I was at the first Mass of a friend who was ordained a priest for the Diocese of Albany last weekend. In all my years of covering events for various Catholic publications — 25 years and counting — I have never attended any priest’s first Mass, and I have to say I was moved and inspired and humbled by this one. It was a beautiful Mass, especially because Father James seemed so at ease as presider, so comfortable in his new role as shepherd.

Before the end of the Mass, Father James talked a lot about the people in his life who had had the courage at one time or another to ask him if he had ever considered being a priest. In addition to a couple of other priests, which didn’t seem so out of the ordinary, he singled out a woman who once came up to him after he had served as an acolyte and his two Confirmation teachers. All three had asked him, “Have you ever considered becoming a priest?” I thought about this and about the fact that Father James said no one — not his family members or friends, not teachers or classmates — had ever spoken negatively about his desire to become a priest. Yes, he had felt a calling to the priesthood from an early age (fifth grade, he said in the Mass program), but what if all those people hadn’t noticed something in him? What if no one had encouraged him by posing that simple question? What if, even worse, someone had discouraged him?

It’s very possible we would have one fewer priest in our Church, and, from everything I know about Father James already, a very special priest at that. I know of one priest — my current pastor — who has asked my son, Noah, directly if he has ever thought about being a priest and has on other occasions casually mentioned, in a light-hearted, unintimidating way, that it might be something for him to consider. I value that. I don’t know what the future holds for Noah or if he will ever feel called to the priesthood, but I like the fact that someone is willing to remind him that he should keep the door open on a noble vocation that doesn’t get a lot of good press these days.

Father James stood before the congregation on Sunday and asked if anyone who had ever considered the priesthood would stand up. It was surprising — and hopeful — to see how many people were willing to get up before a crowd of strangers and bear witness to the fact that God does still whisper to us and that maybe we all need to listen a little more closely. No, we’re not all called to the priesthood or religious life, but we are called to follow God’s path, wherever it may lead us.

Listening to this enthusiastic young priest remind others that God may be calling them, talk about his own struggles along the way, share personal stories about his family and his decision to follow God’s call was the best and most honest advertisement for the priesthood that I have ever heard. Maybe others will consider the priesthood now because he asked them to stand up and be counted. Maybe young men afraid to follow that still, small voice speaking to their hearts will have the courage to do so because they heard first-hand that while the road to the priesthood isn’t always easy it can be happy and fulfilling. Maybe the rest of us will now consider walking up to someone we know who seems to have that certain something and asking, “Have you ever considered becoming a priest?”

Not everyone is called to the priesthood, but we are all called to encourage and support those who choose the road less traveled on behalf of the rest of us.