Poking fun at Sisters is worth more than a laugh 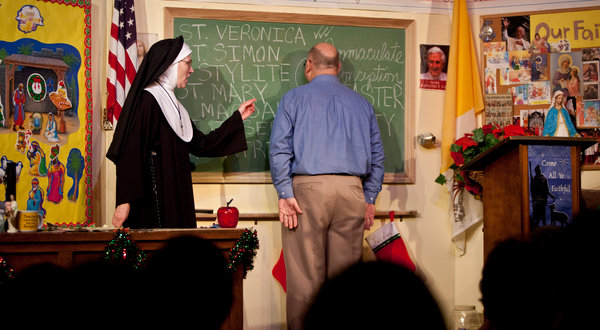 When I saw the headline on this story — “Poking Fun of Nuns, With Big Returns” — I expected the worst. But I was pleasantly surprised to find a really positive story about someone who’s looking to poke fun (in a respectful sort of way) at Catholics sisters while raising funds for them at the same time.

Vicki Quade is the Chicago playwright who wrote “Late Nite Catechism,” a one-woman show where the audience plays the part of Catholic school students. Quade uses the shows to raise money for various communities of religious sisters.

From the story in the New York Times by Mark Oppenheimer:

At first, collections were only around Christmas and Easter, but that soon changed. “At some point around 1996, we said we were going to start collecting all the time” — after every show. And they would periodically bundle the money and give it to an order: the Carmelites, the Sisters of St. Joseph, the Benedictines, the Mercy nuns, the Sisters of St. Francis. “That first check was not much, maybe $1,500. The next check was maybe $5,000.”

Ms. Quade asked an early beneficiary what her order had done with their gift. “She said she used it to bury one of the nuns that died.”

Although not a regular churchgoer, Ms. Quade considers herself “a spiritual Catholic,” and she sent her three children to Catholic school. She grew up in the suburb of Burbank, Ill., back when priests and nuns were plentiful. As a child, her family would let the nuns use a car whenever they needed.

“Father John Hill would come over for dinner,” Ms. Quade remembered. “We loved him. He’d smoke cigars with my dad. But the nuns would knock on the window. My mother would say, ‘The sisters are here, give them the keys.’ They wouldn’t come up on the steps. My mother would say, ‘You have to go give it to them.’”

For the nuns, unlike for the priest, apparently, being inside a family’s home was dangerous. “They didn’t want to be tempted by family niceties,” Ms. Quade said. “They’d given that all up. So they would put their feet not even on the first step, but in front of it. And nothing stuck with me more than that. Father Hill was back there smoking cigars with my dad, and the nuns wouldn’t even come in.”

That memory, Ms. Quade said, fairly sums up why she turned her comedic plays into fund-raisers. “I wanted to honor those women. So we have said, ‘You can do anything with this money. It can be your Häagen-Dazs fund.’ They’ve bought handicapped vans. They’ve redone bathrooms.