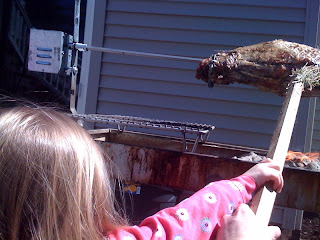 So our friends Abby and Jason invited us over to celebrate Orthodox Easter with their family and friends today. My first Greek Easter. When we arrived, the smell of roasting lamb and the sound of Greek music wafted toward us from the backyard. Stuffed grape leaves and spanikopita were passed around, wine was poured, Greek soup was served, and a whole lamb was turned and basted on a spit. Even Chiara tried her hand at basting with fresh oregano sprigs attached to the end of a wooden stick. (See photo above.)

At the dinner table, I received my first lesson in tsougrisma, a Greek egg game where one person takes a red-dyed Easter egg and clinks the end against the egg of the person next to him while saying, Christos Anesti! (Christ is Risen!). Then the person turns the egg over and using the other end taps back, saying, Aleithos Anesti! (Truly He is Risen!) Around and around it goes until one person is left with an uncracked egg, promising a year of good luck. I ended up being the lucky person tonight. Despite some pretty hard taps, my egg remained unscathed. (That’s it in the photo below.) 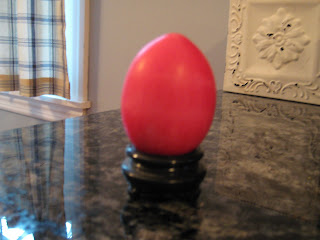 I loved the ritual. The red color symbolizes the blood of Christ, the hard shell of the egg the sealed tomb, and the white egg inside the resurrection. I am told that if I keep my egg uncracked and save it, the inside will dry up and I will be left with the intact shell. I’ve already put it on my prayer shelf downstairs as a reminder of the beautiful Greek Easter tradition. Now we’ll have to wait and see about that promise of good luck. I think I’m pretty lucky already, with or without the red egg.