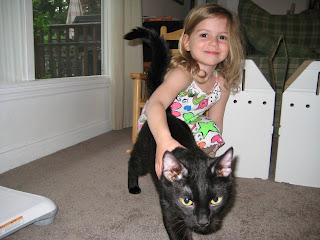 No, I didn’t give away all of my possessions. But I did adopt not one but two cats from the Mohawk and Hudson River Humane Society last night. Crazy, I know. When our dog died last November, Dennis and I swore we’d never again have a pet (we’ve had two dogs and a cat prior to our newest additions). But Olivia began a cat campaign a while back and I guess she just wore us down. Every day she would come home from school and visit the MHRHS website and read me all the vital stats about every single cat awaiting adoption. Finally, she honed in on a cat named Fred (that’s him with Chiara in the photo above). His rap sheet said he was friendly with people of all ages, mellow, a real buddy who would head butt you or even kiss you. We told her maybe after summer vacation, but we knew Fred would likely be long gone by then.

So late yesterday afternoon I took Noah and Olivia up to the Humane Society and asked to see Fred, who was curled up in bed under a shelf fast asleep. We couldn’t even see his face. If Olivia hadn’t spotted him on the website, we never would have picked him. But after about 10 seconds in the petting cage with the kids, they were begging to take Fred home. Then (because Dennis and I are insane) I asked them to put a two-month old kitten, Mirabella, in the cage with the kids. Of course, they loved her too. So I offered to get both Mirabella and Fred. Off we went with our two boxed up cats complete with microchips between their shoulder blades in case they get lost and turned in somewhere.

I wish we’d had the video camera rolling when Chiara first saw Mirabella in the bottom of her crate. She just started giggling and smiling. She could barely contain herself. Fred fell right in line chasing strings and balls, jumping on furniture and even knocking out a screen in a mad dash to chase down some critters in the backyard. Fortunately, I caught him before he could go not so gently into that good night. 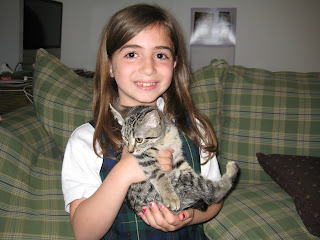 Mirabella (that’s her above with Olivia) spent the entire night until 5 a.m. sleeping curled up next to Olivia. Fred, on the other hand, prowled the house, crying now and then, walking across nightstands and pillows and anything else he could find. By 5 a.m. I was downstairs with him. That’s when he jumped on top of the refrigerator and then attempted to jump on top of our cabinets. Except our cabinets don’t have any open space on top, so Fred hit the ceiling full force, leaving a swath of black fur on the ceiling and falling to the counter top below. We’ll see if this is just first-night jitters or if Fred is insane on a regular basis.

Now Fred is sleeping upstairs and Mirabella is sunbathing near an open family room window. I hope we all get some sleep tonight, but from the photo of Fred below it’s pretty obvious that he’s probably got other plans… 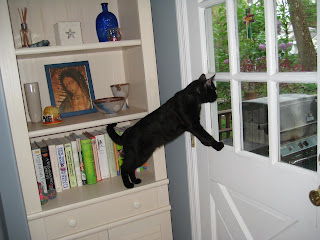