Merton’s influence on the Dalai Lama 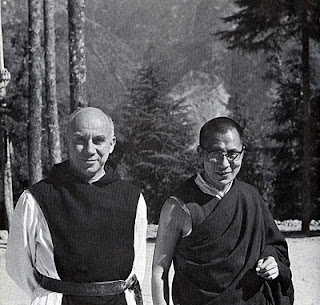 Today, in an op-ed piece in the New York Times, the 14th Dalai Lama writes about his belief in the need for world religions to work together and to learn from one another. He says his moment of clarity on this issue came not from a fellow Buddhist but from Thomas Merton, the Trappist monk whose writings on Eastern spirituality have garnered him as much criticism as they have praise.

As a huge fan of Merton, I know the power of his words, even when I don’t fully understand the depth of what he has written. His words take hold of me and resonate somewhere deep, allowing me to listen with the ‘ear of my heart,’ as St. Benedict taught, even when I’m figuratively scratching my head in confusion.

Both Merton and the Dalai Lama are right: We need to find a way to respect one another, to dialogue and learn from the best of our traditions. And we can learn from each other without losing ourselves or our faith.

Merton wrote in Zen and the Birds of Appetite: “When we set Christianity and Buddhism side by side, we must try to find the points where a genuinely common ground between the two exists.” He went on to write that to compare the two faiths would be like comparing mathematics and tennis. Obviously the differences between Buddhists and Christians, Jews and Muslims and Hindus are great and not easily reconciled, and yet, in our ever-shrinking global village, where we are so interconnected, it is imperative that we find a way to do what Merton suggested more than 40 years ago.

“A main point in my discussion with Merton was how central compassion was to the message of both Christianity and Buddhism. In my readings of the New Testament, I find myself inspired by Jesus’ acts of compassion. His miracle of the loaves and fishes, his healing and his teaching are all motivated by the desire to relieve suffering.

“I’m a firm believer in the power of personal contact to bridge differences, so I’ve long been drawn to dialogues with people of other religious outlooks. The focus on compassion that Merton and I observed in our two religions strikes me as a strong unifying thread among all the major faiths. And these days we need to highlight what unifies us.”