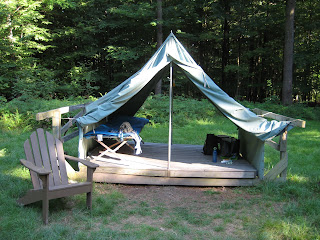 I recently had an opportunity to go on a Boy Scout camping trip with my son, Noah, who is within a stone’s throw of becoming a teenager. I hemmed and hawed when it came time to make the final decision about whether to pack my knapsack and head into the woods. It wasn’t just the thought of the semi-open latrines that caused me doubt. It was the possibility that my presence on the trip might somehow limit Noah. I didn’t want him to think I didn’t trust him, which certainly wasn’t the case.

Truth be told, I really just wanted an excuse to go camping. The older I get, the more I’m intrigued by the possibility of developing a deeper relationship with nature. And the Boy Scouts put on a great program. I’m also not so naïve as to think that Noah will always want me tagging along on his camping trips. So time seemed of the essence.

Noah was not only willing to have me in camp but enthusiastic. It touched my heart to know that my little boy, who is not so little any more, still enjoys having me around. My job, then, was to be present without being oppressive, which can be a fine line to walk when all your motherly instincts are telling you to reach out and wipe the remnants of an orange Slushie from around your child’s mouth.

It was such a treat to see Noah – as well as the other teens and near-teens in his troop — take on challenges they would normally skip in lieu of video games or TV. As I watched them venture out of their comfort zones, it reminded me that every day each one of us is given the option of choosing to stretch rather than stick with the status quo, of opting for new experiences over comfortable routines.

I watched from afar as Noah worked on his swimming merit badge. He had to jump in the lake fully clothed, remove his shirt and jeans and turn them into a floatation device. I stood in awe as I saw him struggle and succeed at something I couldn’t even dream of attempting. He caught a fish, he dissected a fish, he shot a rifle, he swam 150 yards without stopping, he snorkeled, he made a first aid kit, he waited tables in the mess hall, he walked back and forth and back and forth through camp, winding his way through mud and darkness without fear or frustration. And I sat near the campfire, waiting and watching for the glimmer of his flashlight shining in the darkness to signal that he was “home.”

Boy Scout camp is meant to challenge the boys. But as I made my own way at Rotary Scout Reservation, I realized that it was challenging me as well. First there were the easy challenges: letting go of the urge to go through my normal hair and make-up routine before venturing down to flag ceremony and breakfast, sleeping in a tent where animals were scurrying under my platform and grasshoppers were hovering above my head, using stinky latrines that didn’t even have doors. And then there were the harder challenges: letting Noah make his own choices and maybe even his own mistakes, inviting him to hike with me but giving him a wide berth, remembering that this was his week and he shouldn’t have to cater to mom’s every whim, trusting that even if I hadn’t been around to remind him he would ultimately do the right thing.

I may not have an opportunity like this one again. By next year Noah may want more independence, or at least some time out from under his parents’ watchful gazes. And that’s OK because if learned one thing on this camping trip it’s this: My son can handle a lot more than either one of us realized. He’s ready to stretch, and so, it seems, am I.