Is Jesus getting crowded out by complaints? 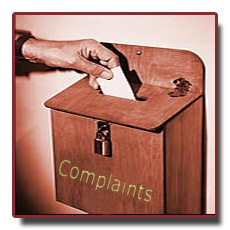 If you frequent this blog, you know I complain. A lot. Here I mostly complain about the fact that my spiritual life is dry and God won’t send me a sign and where is Jesus and why, oh, why don’t my prayers feel like they’re doing anything. And on and on and on.

It’s no better in my “real” life. If you could eavesdrop while I’m in my office or in my car or in my kitchen, you’d hear more complaining – about the messy house, about the lack of time to do what needs to be done, about deadlines, about kids who don’t listen, about the weather, about slow Internet service, about not knowing how to work the TV remote. You name it, and I’ll complain about it.

The funny thing is, I’m actually quite aware of my blessings. I even have a gratitude journal, although I haven’t visited those pages in a while. I know full well that my life is, well, full. Full of good things, and shouldn’t that be enough? I live in fear, to be honest, of when it will be my turn to face some really hard times. I’ve faced them before, to be sure (my mother’s death 25 years ago is the star player there, but my divorce comes in as a close second), so I am not immune to the reality that bad things happen to moderately good people. But my glass half-empty attitude leans toward seeing the dark side of things most of the time, a perpetual state of always waiting for the other shoe to drop.

Well, Pope Francis called me on it this week. Not me personally, but all of us who lean toward complaint rather than thanksgiving, half-empty rather than half-full, and what he said was profound (as usual). Here’s a bit from a CNS story by Cindy Wooden:

Celebrating morning Mass earlier this week with staff members from the Domus Romana Sacerdotalis, a nearby residence and guesthouse for clergy, Pope Francis preached about the Gospel story from St. Luke about the two disappointed disciples on the road to Emmaus after the death of Jesus.

“They were afraid. All of the disciples were afraid,” he said. As they walked toward Emmaus and discussed everything that had happened, they were sad and complaining. “And the more they complained, the more they were closed in on themselves: They did not have a horizon before them, only a wall,” the Pope explained, according to Vatican Radio.

The disciples had had such high hopes that Jesus would be the one who would redeem Israel, but they thought their hopes were destroyed, he said on Wednesday.

“And they stewed, so to speak, their lives in the juice of their complaints and kept going on and on and on with the complaining,” the Pope said. “I think that many times when difficult things happen, including when we are visited by the cross, we run the risk of closing ourselves off in complaints.”

Like the disciples joined by the risen Lord on the road to Emmaus, people can hear beautiful things, but deep down, they continue to be afraid, the Pope told the congregation.

“Complaining seems safer. It’s something certain. This is my truth: failure,” he said before adding that the Gospel story shows how very patient Jesus is with the disciples, first listening to them and then explaining things step by step, until they see him.

Complaining and griping, about others and about things in one’s own life, is harmful “because it dashes hope. Don’t get into this game of a life of complaints.”

Um….stewing our lives in the juice of our complaining. Wow, there’s an image that hits hard because it’s so dang true. Sounds about right. How often do I stew my daily life in the juice of complaining rather than in the flavorful broth of gratitude and blessings? Too often. How likely am I to close in on myself in a world focused on things not going exactly according to plan rather than open up to a world of possibility? Too likely.

It’s like exercise and eating right. I know what I should do, but often choose just the opposite. I know I should live in the light. I know I’d get more with honey than vinegar. I know keeping a list of blessings rather than a list of heartbreaks would go a long way toward shifting my overall perspective, but it’s difficult and it means changing and sometimes it’s easier to just skip the exercise, skip the healthy dinner, and skip the list of blessings and simply stew over all the minor injustices in my life.

I recently told a good friend, a spiritual friend that I feel a disconnect from Jesus and just don’t know why. Maybe Pope Francis has the answer, maybe, just maybe, if I stop complaining long enough to hear myself think I’ll realize – like the disciples on the road to Emmaus – that Jesus has been there all along trying to get a word in edgewise and waiting for me to recognize him.