I’m ready for my next camp out 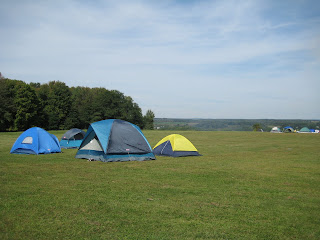 See that little yellow and blue tent above? That was my tent during the weekend Boy Scout encampment and retreat at the National Shrine of the North American Martyrs in Auriesville, N.Y., which is a beautiful and sacred place overlooking the Mohawk Valley. This is where Blessed Kateri Tekakwitha, Lily of the Mohawks, was born and where Jesuit missionaries St. Isaac Jogues and St. Rene Goupil and lay missioner St. John Lalande were martyred. The entire place, which includes a beautiful 6,000-seat Coliseum church built in 1930, a small screened-in chapel in honor of Kateri, a ravine where you can read the story of Rene Goupil in Isaac Jogues’ own words, and so many other paths that take you through the Stations of the Cross or to other shrines and statues, is just gorgeous, especially on a picture-perfect early fall weekend like we had. I cannot believe it took me eight years to get to this wonderful spot only 45 minutes from my house.

Here’s the view from the Coliseum. (If you click on the photos, you should be able to enlarge them.) That’s the Mohawk River in the distance. It’s pretty easy to see why the Mohawk Indians settled here: 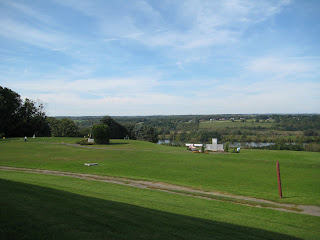 Here’s Noah in the ravine, preparing to ascend what the boys affectionately referred to as the “hill of death.” I took the long way back to camp via the ravine path: 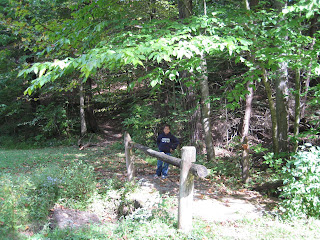 Although the retreat itself was great, I really loved the camping aspect of this trip, even on Friday night when the temperatures dropped and I was wearing long underwear, a sweatsuit with an extra sweatshirt on top, a hat, a hood, gloves and socks inside my mummy bag in order to stay warm, which I did — except for my face. Still, I think I’ve finally gotten over the horrible camping experiences I had as a Girl Scout. I am so ready to begin family camping, although I think we’ll wait until late spring or summer when there is no danger of frost or worse.

The boys on the trip were great, too. They paid attention during the retreat talks, given by the very energetic and interesting Jesuit Father Rocco Danzi, and they tried to pull their weight at the camp site. Noah made scrambled eggs for breakfast and hamburgers for dinner on the propane stove, and he helped wash dishes and pots when he wasn’t cooking. The boys even took care of this vegetarian mom, cooking my fake hot dogs in a separate pot so as not to contaminate them. I don’t know if it was their special touch or the cold air, but they were the best vegetarian hot dogs I’ve ever had.

At night, the big sky was so filled with stars that you couldn’t help but stand there looking up in awe. When everyone was tucked into their sleeping bags, I could hear the boys in the tent next to mine playing the ukulele, plucking out Stairway to Heaven. Talk about a song with staying power. In the mornings, everything was covered with dew and a heavy mist settled in the valley until the sun could burn it off. The only thing missing on this trip was a campfire, which was a big loss, but we’ll make sure we have a fire pit next year. See, I’m already planning on going back next year.

Here are a couple more photos from our retreat. The crosses mark the entrance to the main grounds: 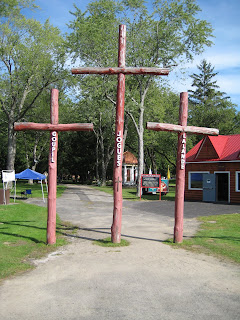 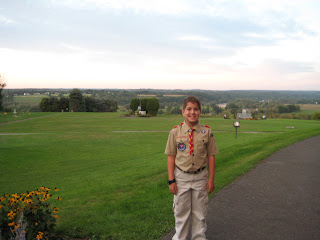