From the Lorax to Hildegard of Bingen 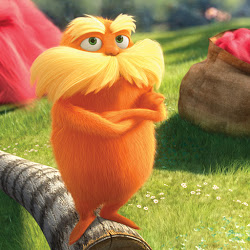 So last night I watched a double feature: Dr. Seuss’s “The Lorax” followed by “Vision: From the Life of Hildegard Von Bingen.” On the surface this rather surreal pairing might seem just too weird for words. Even I thought so as I tried to make the mental and visual shift from technicolor Thneedville to 12th-century Germany.

Only a few minutes into “Vision,” however, I realized there actually was a connection, be it a tangential one, between the Lorax who “speaks for the trees” and the mystic who valued nature and herbal medicine as a key part of her spiritual and physical practice.

I was sort of dreading “The Lorax,” which the girls begged me to watch as part of our “girls night.” I love Dr. Seuss, but as far as I’m concerned, none of the modern film versions of the old book classics really measure up. I won’t even allow the Jim Carrey version of “The Grinch” into my house. Or “The Cat in the Hat.” But “The Lorax” was actually good and thoughtful and uplifting in a crunchy sort of way, and, you know me, I love crunchy. So I was totally okay with the over-the-top tree-hugging green-ness of this film.

The funny thing is, Hildgegard is kind of just as over-the-top when it  comes to the environment as the Lorax, but with the added dimension of over-the-top visions and voices. She doesn’t just speak for the trees. She goes straight to the top, speaking for God.

The girls actually watched the first part of “Vision” with me. Their choice. It was not a punishment of some sort. I had to force them to cover their eyes during a couple of icky scenes of people flagellating themselves, and I had to read the subtitles aloud for Chiara (since the movie is in German), but otherwise they were actually interested in the story of this young girl who goes off to live in a convent and becomes a strong and forward-thinking woman who could also heal people with herbal remedies, compose beautiful music, write poetry and lead a religious community, all while living with regular visions and messages from God. I eventually had to make them go to bed because it was getting late, but the first thing Olivia asked when she came downstairs this morning was how I liked the rest of the movie.

I loved it. I could watch it again, which surprises me because I kind of thought I’d just get through it, what with all the German and medieval weirdness. But it’s beautifully shot and powerfully acted. And Hildegard, who became a saint and a Doctor of the Church last year, is such a great Catholic story, such a great Catholic woman.

So I recommend both movies. Try them as a double feature.