Should Eucharist be the only thing that matters? 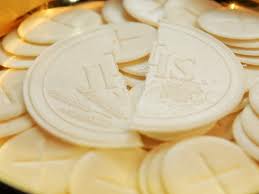 Over the past few weeks, folks here have talked about the role of Eucharist in their lives and in the liturgy, with a lot of people saying as long as there is Eucharist it shouldn’t matter how lame the rest of the liturgy might be. One commenter went so far as to say that even if Nazis did liturgical dance for an hour, it wouldn’t matter if Eucharist was at the end of it. Yes, someone actually presented that argument. So I thought maybe we needed to talk about this a little more, about Eucharist and how it plays into the life of an average Catholic.

First, I think we have to realize that those people who say that as long as they have Eucharist nothing else matters clearly have achieved some higher level of spirituality, because most regular folks in the pews — even the ones who are dedicated and deeply faithful Catholics — need some help to get to that place. It’s not so simple as A+B=C. It’s just not. There is nothing simple about Eucharist, and so to make a blanket statement that all people should be fed by that alone and never need anything else is unrealistic and kind of dangerous, at least in terms of evangelization. Because if we think that way, we’re going to lose a whole bunch of people who are looking for a pathway toward a fuller understanding of Eucharist in their lives. They will get lost long before they get there without guidance and nourishment along the way.

But let’s look at it a different way. When Jesus began gathering his followers around him, what did he do? He taught them. He told them stories. He showed them what love and mercy looked like in action. He didn’t start with the Eucharist. He couldn’t start with the Eucharist, because it wouldn’t have meant anything at that point. He needed to lead people, feed people, and bring people to a point where Eucharist could transform them.

If he had sat down with them upon first meeting and said, “This is my body,” no one could have understood. Even as it was, there was confusion and disbelief by some. Even today there is often confusion and disbelief. So to say simply, “Eucharist is all that should matter,” is misguided at best. Although we are all called to be saints, most of us still have a pretty long way to go, and most of us need a little help to get from point A to point B. At least I know I do. Without the word, without good preaching, without music and community and continuing spiritual formation and nourishment, we cannot possibly understand source and summit as it is meant to be understood this side of heaven.

Every time I walk up to receive Communion, I think to myself, “If I believed the way I should believe, I could do nothing but prostrate myself on the ground before the Eucharist.” Really, how could any of us do anything less than that before the sheer magnificence of what’s being given to us. And yet we do. We walk up and take it as if it is the most normal thing in the world, no matter how reverent we may be. So I think we all need to cut each other a little slack and recognize that we are all spiritual works in progress and we can use all the help we can get in whatever form we can get it. And that if we’re not getting that, we’re going to demand it and scream and shout — even if only in printed form — to get what we need to reach heaven.