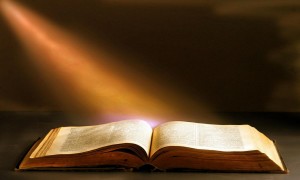 Over and over yesterday, in response to my “Losing My Religion” post, many people tried to convince me that a bad liturgy shouldn’t matter all that much in my faith life. Some who don’t know me very well — or at all — assumed (wrongly) that one or two bad homilies had sent me running. All that matters is the Eucharist, they said. And, I’ll give you this, the only reason I stayed seated in that church this weekend is because of the Eucharist. I would have been out the door before the homily was even close to over if not for that, but are we really going to pretend that the Word doesn’t matter? Because it does.

We come out of the Word. We are bound to the Word. We live by the Word. And if the Word isn’t being preached in a way that relates to people’s lives, well, there’s not much chance they’re going to find meaning in the Eucharist. And I’m not talking about myself here. I’m talking about the countless other Catholics who sit in pews week after week, hungry, waiting, praying that someone will feed them, and although they receive Communion they often leave feeling that same hungry ache in their soul. Yes, Eucharist is source and summit, but mere mortals can’t always get to that place without a little support and help and nourishment along the way. Enter the Word.

Let me ask you this: If Jesus just went out there and took some old message preached centuries earlier and read it to the crowds without relating anything to their day-to-day lives, do you think anyone would have stuck around? Do you think people would have given up everything to follow him if the Word didn’t matter? Do you think there would have been anyone sitting around the table for the Last Supper if Jesus didn’t first draw them in with parables and stories that connected their faith to their everyday lives? No.

As I tried to get across in yesterday’s post, my discontent with my current church experience is not based on a single homily or even a series of homilies or homilies in general; it’s based on the whole package. As a lifelong Catholic who’s been a Catholic journalist for almost 30 years, I don’t take the whole “losing my religion” thing lightly. In fact, just last week I went on a silent retreat specifically because I felt I needed to pray on this and spend time in solitude with God. So, if you don’t know me, try to understand that none of this comes from a place of boredom or single-homily frustration or from an unwillingness on my part to bring something to the table, as was suggested a bunch of times yesterday. This has been years in the making, thanks to one bad experience after another, and it is a cross for me. And what I said yesterday, I said out of love for my faith and my Church and my brothers and sisters sitting in the pews beside me and feeling just as alone and deprived.

When I go to church and nothing – from the six-verse processional dirge to the poor sound system to the inane homilies to the complete lack of community – seems to feed me, well, I tend to ask myself one question, “If I were coming to this church for the very first time, if I were a non-Catholic thinking about becoming a Catholic, would I ever come back?” And nine times out of ten, the answer is a resounding NO!

We need to do better as a Church, and if the only way to get the attention of those in charge is to pull our donations and take back our time and maybe just stand up and take that long walk of shame down the center aisle in the middle of Mass, then so be it. It’s worth it if it prompts even the slightest movement in the right direction.

As I told someone in a comment yesterday, I know my faith. I know my God. I’m not worried about that. It’s my Church I’m worried about, and that’s the truth. God and I are just fine, no thanks to what I’m getting in Sunday liturgies. But what about those folks who don’t have that foundation? What about the people who wander in hoping for someone to pick them up out of their darkness and lead them forward? For their sake and my own, I’m going to fight the good fight, even if it means ruffling some feathers along the way. People suggested I DO something about it. This is me doing something about it in the only way I know, using words, because words can be a lifeline to people, maybe the thing they grab onto until Eucharist takes hold and transforms.

And I’m going to hold onto the Word for dear life and refuse to accept that it shouldn’t matter so much if it’s mangled and mistreated at Mass. So often, when I have wanted to walk away, not just one Saturday night or Sunday morning but for good, I have come back to the words of Peter: “Master, to whom shall we go? You have the words of eternal life.”

“You have the words….”  Words matter. The Word matters, even at Mass when we have the benefit of the Eucharist. Especially at Mass.