Doesn’t everyone start Advent with a coin toss? 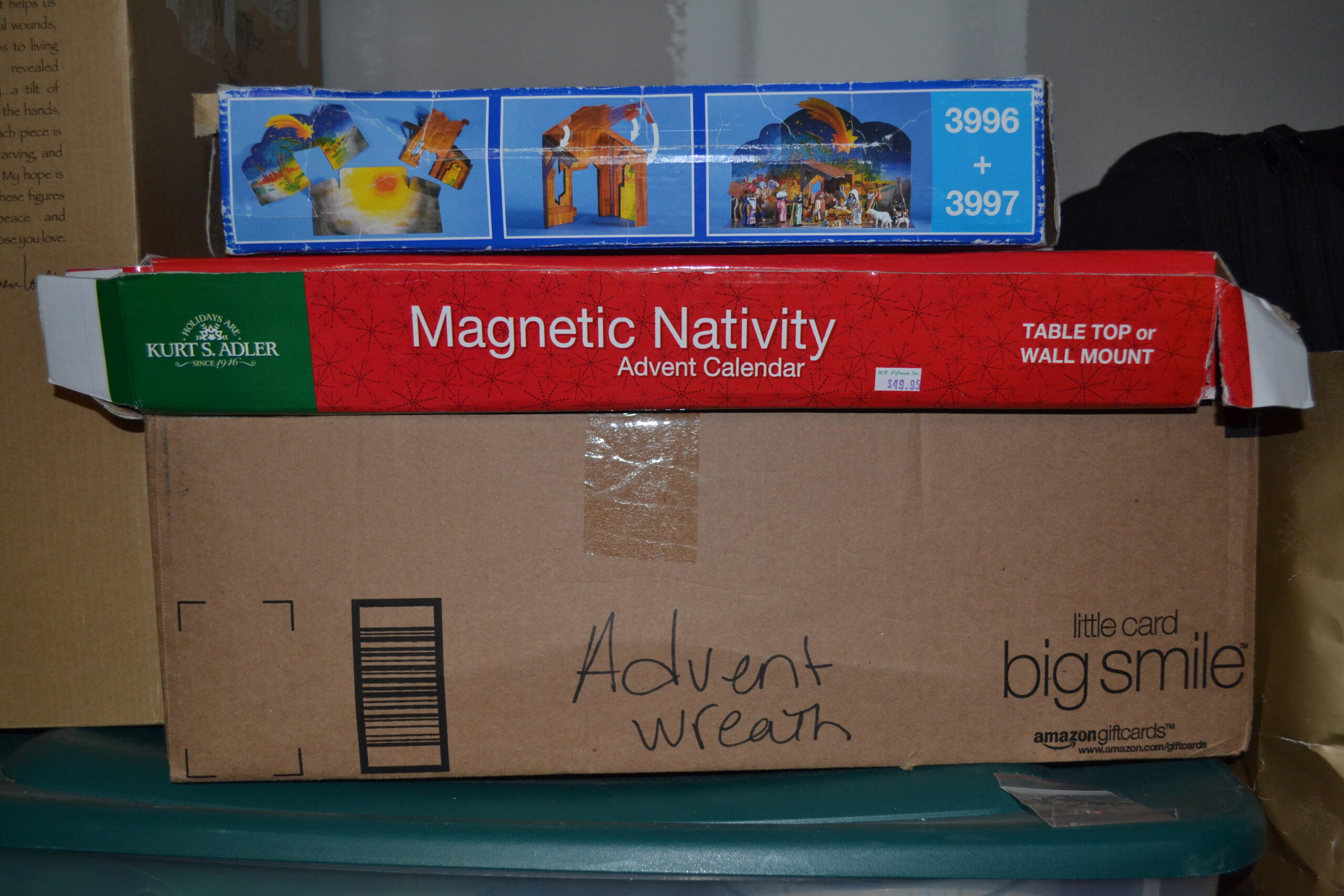 I wish I could begin this post with some inspiring story about how we returned from Saturday evening Mass and a lovely dinner out last night to gather around the Advent wreath and begin this season of hopeful anticipation with joy and love and peace. And I guess I could tell you that if I just wanted to sound good in print, but (as I mentioned yesterday in my welcome-to-the-new-blog post) this place is about honesty on the spiritual journey, and so I have to tell you what really happened.

We came home from church last night planning to watch “Elf” as a family in front of a roaring fire. Before that, however, Dennis told the kids to open the first door on the wooden Advent calendar and put up the little magnetic star that kicks off the household rituals for the Advent season. The Advent wreath was also waiting to be lit for the first time. The little Advent tree (not a Jesse Tree) — with its daily ornaments — hadn’t even made it out of the storage bin.

The girls walked into the family room and the annual Advent fight began. It seems our Advent activities have nothing to do with getting ready for the birth of Jesus Christ and everything to do with pulling one over on your sibling. And so the screaming started — over who would open the first door — as the mental calculations began. What mental calculations? If you have children, especially older children capable of adding and subtracting quickly, you probably know the drill. They’re trying to figure out when they need to open the door in the rotation so they land on Christmas Eve and get to put Jesus into the manger.

And that’s what this season is about, right? Being the last man standing in the Advent calendar showdown. After the fighting would not subside despite a call from the ref (Dennis) for a coin toss to settle the matter (Doesn’t everyone start Advent with a coin toss?), the girls were sent to their rooms, where there was wailing and gnashing of teeth.

So I packed the calendar back into its cardboard box and returned it to the mayhem of the basement’s unfinished side. (See photo above.) I moved the Advent wreath from its central spot on our family’s dinner table to the dining room where now it’s just a centerpiece, and I carried off the Playmobil Nativity set. I have no intention of carrying out an Advent charade where we treat each other like garbage in the name of Jesus. I think that’s missing the point. Just a bit.

The girls did sneak downstairs about an hour after the fight-to-the-death to leave a desperate note of apology on the kitchen floor while we were in the next room in front of the fire. And eventually they came down and confessed, apologized, cried, begged, looked sufficiently shamed, and so we let them watch “Elf” with us since it’s so rare that we actually sit down as a family to watch a movie together. And maybe Buddy the Elf was just what we needed to gingerly walk us back a few steps, make us smile, and help us reconsider how we want to approach this season after all.

The Advent calendar is still in the box and the wreath is still in the next room. I’m hoping that maybe by this afternoon or this evening, when we sit down to dinner, we’ll be ready to embrace Advent from a spirit of love and joy, rather than greed and competition. That remains to be seen, however, since there’s always the opportunity to argue over who lights the candle and who blows it out.

As I came downstairs this morning to get my first cup of coffee, I mumbled to myself: “I wanted this year to be different.” And then, without really even realizing what I was saying (Spirit at work for sure), I said: “If I want this year to be different, I have to be different.” And isn’t that really what Advent is about? Becoming “different,” changed by Christ so that his love permeates everything we do, everything we say, and there’s no more need for the external trappings that lead us to him because he’s already living in our hearts.