Bono on grace, Jesus, and the power of the cross 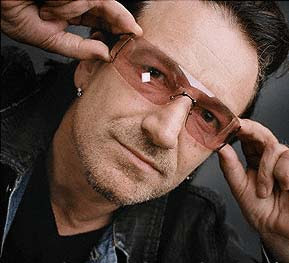 My spiritual reading this morning was taken from none other than U2 frontman Bono. I wanted to pull one great quote for you to ponder, but, to be honest, the whole interview was one great quote — about God, about grace, about Jesus as Messiah. I sat at my kitchen table and read it aloud to my 14-year-old son. It was that good.

Don’t believe me? Here are a few select quotes from Bono: In Conversation With Michka Assayas, which is being excerpted over on a Christian apologetics site called The Poached Egg.

Bono on Scripture, and God as love personified:

Bono: My understanding of the Scriptures has been made simple by the person of Christ. Christ teaches that God is love. What does that mean? What it means for me: a study of the life of Christ. Love here describes itself as a child born in straw poverty, the most vulnerable situation of all, without honor. I don’t let my religious world get too complicated. I just kind of go: Well, I think I know what God is. God is love, and as much as I respond [sighs] in allowing myself to be transformed by that love and acting in that love, that’s my religion. Where things get complicated for me, is when I try to live this love. Now that’s not so easy.

Bono on grace over karma:

Bono: You see, at the center of all religions is the idea of Karma. You know, what you put out comes back to you: an eye for an eye, a tooth for a tooth, or in physics; in physical laws every action is met by an equal or an opposite one. It’s clear to me that Karma is at the very heart of the universe. I’m absolutely sure of it. And yet, along comes this idea called Grace to upend all that “as you reap, so you will sow” stuff. Grace defies reason and logic. Love interrupts, if you like, the consequences of your actions, which in my case is very good news indeed, because I’ve done a lot of stupid stuff.

Bono: That’s between me and God. But I’d be in big trouble if Karma was going to finally be my judge. I’d be in deep s—. It doesn’t excuse my mistakes, but I’m holding out for Grace. I’m holding out that Jesus took my sins onto the Cross, because I know who I am, and I hope I don’t have to depend on my own religiosity.

Bono on Jesus as Messiah:

Assayas: The Son of God who takes away the sins of the world. I wish I could believe in that.

Bono: But I love the idea of the Sacrificial Lamb. I love the idea that God says: Look, you cretins, there are certain results to the way we are, to selfishness, and there’s a mortality as part of your very sinful nature, and, let’s face it, you’re not living a very good life, are you? There are consequences to actions. The point of the death of Christ is that Christ took on the sins of the world, so that what we put out did not come back to us, and that our sinful nature does not reap the obvious death. That’s the point. It should keep us humbled . It’s not our own good works that get us through the gates of heaven.

Assayas: That’s a great idea, no denying it. Such great hope is wonderful, even though it’s close to lunacy, in my view. Christ has his rank among the world’s great thinkers. But Son of God, isn’t that farfetched?

Bono: No, it’s not farfetched to me. Look, the secular response to the Christ story always goes like this: he was a great prophet, obviously a very interesting guy, had a lot to say along the lines of other great prophets, be they Elijah, Muhammad, Buddha, or Confucius. But actually Christ doesn’t allow you that. He doesn’t let you off that hook. Christ says: No. I’m not saying I’m a teacher, don’t call me teacher. I’m not saying I’m a prophet. I’m saying: “I’m the Messiah.” I’m saying: “I am God incarnate.” And people say: No, no, please, just be a prophet. A prophet, we can take. You’re a bit eccentric. We’ve had John the Baptist eating locusts and wild honey, we can handle that. But don’t mention the “M” word! Because, you know, we’re gonna have to crucify you. And he goes: No, no. I know you’re expecting me to come back with an army, and set you free from these creeps, but actually I am the Messiah. At this point, everyone starts staring at their shoes, and says: Oh, my God, he’s gonna keep saying this. So what you’re left with is: either Christ was who He said He was the Messiah or a complete nutcase. I mean, we’re talking nutcase on the level of Charles Manson. This man was like some of the people we’ve been talking about earlier. This man was strapping himself to a bomb, and had “King of the Jews” on his head, and, as they were putting him up on the Cross, was going: OK, martyrdom, here we go. Bring on the pain! I can take it. I’m not joking here. The idea that the entire course of civilization for over half of the globe could have its fate changed and turned upside-down by a nutcase, for me, that’s farfetched.

Go read more excerpts (including his comments about meeting Pope John Paul II) HERE. To have a rock star of this caliber talking about his relationship with Jesus Christ is so powerful. It’s certainly not the first time he’s done it, but I think it’s the most honest and detailed and significant of his comments on his Christian faith. Regardless of whether you like his music or his specific take on Christianity, this is huge.