A new perspective on the Mass 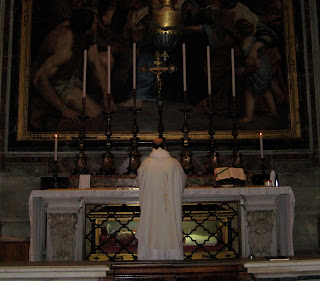 Having come of age in the era just post Vatican II, I never experienced the “old” Mass. Although my parish did have a Communion rail in its chapel, where I received Communion often, my general experience of the Mass growing up was of the groovy variety, with lots of Kumbayas and felt banners. Not that there’s anything wrong with that.

So when I got to Rome, I was in for a little spiritual culture shock. Because the churches are so old, the altars are built into the wall under the tabernacle. What does that mean? It means the priest has no choice but to celebrate Mass with his back to the congregation. If you had asked me before my recent pilgrimage to Rome how I would feel about this change of positions, I probably would have expected it to be a little off-putting. Turns out it was anything but.

At the risk of setting myself up for a wave of comments, I have to say that I LOVED attending Mass this way. Why? Because I felt it was a great equalizer. Rather than seeing the priest in a position of power, facing me, almost as if performing for the congregation, I saw him as praying with me. He was facing God as I was facing God. We were in it together, looking heavenward as one rather than looking at each other.

I was fortunate enough to attend multiple Masses in Rome, but the ones with the most impact and where the priest-facing-away situation felt the most powerful, were in St. Peter’s Basilica and in Chiesa Nouva at a Mass celebrated in front of the body of St. Philip Neri. Both had an intimate feel — the Mass at St. Peter’s was in a side chapel to Our Lady of Perpetual Help — and both made me feel as though the priest was one with the congregation, even when the congregation was just me and an OSV colleague (as in St. Peter’s).

So that’s my new perspective on an old tradition. Let’s hear how you feel about this in the comment section?