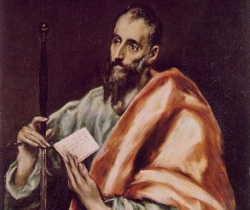 It was an inscription someone wrote to him when he was ordained a deacon in Rome. I really like it though — so succinct and yet so full of clarity and challenge. In fact, I jotted it down in a journal so I wouldn’t forget it, seeing as these days I’m so forgetful that yesterday I almost returned my own books to the public library by mistake. Yes, it’s been that kind of week, and it’s only Tuesday.

Earlier this spring I did experience a kind of connection with Paul’s story in the readings of the Acts of the Apostles. The “Pray-as-You-Go” podcasts I frequently download were focusing on  Acts, and I was really struck (so to speak) by Paul (then Saul) and his role in the stoning death of Stephen (Acts 8:1), the brazenness of his attacks on the Church, the courage of the people who continued to preach despite the threats to their lives, and then Paul’s eventual and stunning conversion.

And while I love the “many parts, one body” aspect of his letter to the Romans and, of course, his treatise on faith, hope and love in his First Letter to the Corinthians, I’ve kind of always been hung up on the “wives be subordinate to your husbands” thing in his Letter to the Ephesians. I know, I know, you’re going to tell me I need to look beyond the literal meaning or the time he was living in or the people he was preaching to. Doesn’t matter. That’s a pretty tough line to get past, especially when you have to sit through it in a church filled with all those smiling husbands.

But, in keeping with the theme of this Jubilee Year, I will open my mind to the possibility that I could learn a lot from Paul, although subordination will not be high up on my list.

“Believe as Peter. Preach as Paul. Love as the Master.” A tall order, but our ultimate calling nonetheless.