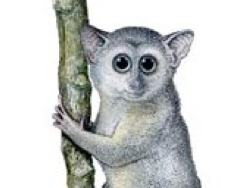 OK, I know there’s a joke in there somewhere. But seriously, the New York Times reported yesterday that the 55.8 million-year-old fossil of a one-ounce “monkeylike” creature (read the full story HERE) was discovered in the infamous Mississippi mud. One ounce? How does something that is one ounce migrate all the way from Asia to North America, even if the Bering Strait was a forest at the time. I can’t get my children to migrate from their bedrooms to the kitchen on most days.

Scientists decided to name this wee monkeylike creature after Pierre Teilhard de Chardin, the French Jesuit priest and paleontologist who was silenced by the Church in the 1950s for his writings on everything from evolution to the Eucharist. It’s not a direct naming, but it’s close enough: Teilhard magnoliana, which includes a tip of the hat to the Magnolia State where the little fellow was discovered.

Teilhard de Chardin, who was involved in the discovery of Peking Man in the 1920s, remains a controversial figure to this day. After an attempt by supporters to cast him in a favorable Church light on his 100th birthday in 1981, the Vatican clarified that the 1962 ruling that classified his work as dangerous would stand.

I thought that this sudden resurgence of Teilhard in the news presented a perfect time to talk about the Church’s position on evolution and the fact that many non-Catholics — and plenty of Catholics — do not realize that Church teaching and evolution are not incompatible and are, in fact, complementary. As long as you don’t start dabbling in the randomness of Darwinism.

. I’m excerpting a section on evolution from my new book, The Complete Idiot’s Guide to the Catholic Catechism. Yup, shameless self-promotion.

It’s déjà vu all over again…

July 31, 2008 • Original NSS
OK, I’ll be blogging from my blogspot location again for the foreseeable future. Unfortunately, it’s not because I’ll be watching the waves crash in Wildwood ...
Read More

The best kind of lost weekend

July 29, 2008 • family, Original NSS
OK, so I disappeared for a few days without notice, without giving you a forwarding address, without even mentioning I was heading out of town. Sorry. My ...
Read More