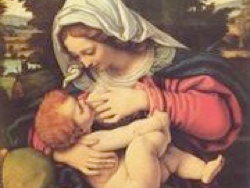 It’s a rare moment when the Vatican can reaffirm the Incarnation and at the same time appease earth mothers everywhere, but Church officials pulled off that amazing feat recently when they declared that artistic images of Mary nursing the infant Jesus should be “rehabilitated.” It seems the images, which were quite common back in the day, were banned around the 16th or 17th century when breasts became taboo and were seen as either medical or erotic but, as is always confounding — at least to me, not for the natural, God-given purposes for which they were created. The painting above, “Nursing Madonna” by the Italian Renaissance artist Andrea Solari, is one of the shocking depictions in question. Aren’t we humans too funny?

Of course Mary nursed Jesus. Back before the medical community convinced the world — at least the industrialized world —  that a man-made made powder full of artificial ingredients with names too long to pronounce was better than the absolutely perfect nutritional make-up of mother’s milk, everyone nursed. Can you imagine Mary, during the flight to Egypt, trying to find a Wal-Mart so she could pick up a case of Similac?

Perhaps we can forgive the fact that our Medieval counterparts were uncomfortable with the visual image of the Mother of God nursing the Son of God. After all, they were Medieval, for goodness sake. They didn’t get that reputation for nothing, you know. But what is not so easy to forgive is the modern-day discomfort with breast-feeding in a society where breasts are used to sell beer and cars and just about everything else you can imagine and probably a few things you can’t.

I would not go so far as to call myself a nursing zealot, but I’m pretty close to it. I have an incredibly hard time understanding how women choose not to nurse — some don’t even attempt it — when even the American Academy of Pediatrics has come around, urging women to breast-feed their babies for the first year of life. It is a normal, natural, nutritious, and beautiful thing, even if it is not always an easy thing to figure out at the outset.

And I, like the nursing Mary of early artistic depictions, also have been whisked away and hidden under cover by those who could not bear the presence of a nursing mother in their midst. I was one of the most discreet nursers ever, using overcoats and blankets to prevent anyone from witnessing the horror of a baby doing what a baby is supposed to do. In addition, Dennis would typically stand guard right in front of me. Didn’t matter. People often recoil at the notion of nursing, as if it is a dirty word. Ironically, that seems to be especially true here in liberal New York State, unlike the open-minded attitude toward nursing that I found in the very red State of Texas that was once my home. Once I was even escorted to an upstairs room at a N.Y. friend’s house, where the blinds were drawn and the door locked, as if I had just announced I was going to smoke crack.

We need to get our priorities in order, and I, for one, am thankful that the Vatican is recognizing the value of bringing those artistic depictions of the nursing madonna out of the back room at the museum. As one priest reportedly wrote, seeing Jesus nursing from his mother’s breast, is “one of the most eloquent signs that the word of God truly and undoubtedly became flesh.”

And the next time you see a mom trying to nurse her baby in a public place, remember that she’s probably a lot more uncomfortable than you’ll ever be, given the fact that she knows that passersby are watching and shaking their heads in disgust, probably as they head on over to Hooters for lunch.