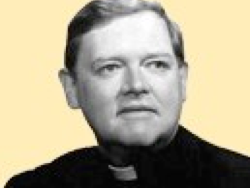 It is somewhat shocking to report the sudden and unexpected death of yet another influential Catholic writer, Father Paul Keenan, a wonderful New York priest who was both a successful Catholic radio personality and a prolific Catholic author. Father Paul was a fellow columnist for Catholic New York, and during the recent papal visit we joked about the fact that we are usually facing each other on those pages once a month.

Father Paul was most recently the host of the weekly inspirational radio program “As You Think” on The Catholic Channel on Sirius Satellite Radio, but he was perhaps best known for the 14 years he spent as co-host of “Religion on the Line” on WABC-AM Radio. I was lucky enough to be a guest of Father Paul’s on “Religion on the Line” back when my first book, Parenting a Grieving Child, came out. I had never done a radio show, no less a live, call-in show, but Father Paul put me at ease and we ended up staying on the air for an hour rather than 30 minutes. He had a way of making radio seem easy, but that was because he was such a good host.

If you would like to learn more about Father Paul, click HERE to read the bio on his Web site. If you would like to read Father Paul’s last Catholic New York column, . I think it is an especially fitting, if unplanned, sign-off about recognizing the “deep so profound” in the people around us. It will give you a sense of the man behind the words.

I did not know Father Paul well, but I knew him well enough to recognize that he was one of the good guys, a person who leads others closer to God through his amazing ability to put into written and spoken words what the rest of us are longing for in our hearts and souls. He will be missed.

January 24, 2018 • Life in My 50s, writing
It was 10 years ago today that I decided to launch this blog on the Feast of St. Francis de Sales, patron saint of communicators. Where has the time gone? ...
Read More

Christmas in July. Sort of.

July 13, 2017 • Advent, Books
My newest book of spiritual reflections is now available from Liturgical Press. It's never too early to start planning for Christmas, right? You can ...
Read More