Chiara has left the building 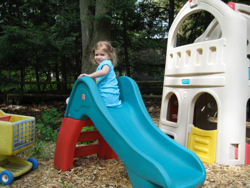 Third time’s a charm, they say, and in our case the third time (aka Chiara) had better be a lucky charm because she’s going to need it with her wild, in-your-face, take-no-prisoners behavior. I don’t know what it is that makes Chiara so willing to push the envelope where her older brother and sister did not, but I do know that the girl has got more chutzpah in her left pinky than most people have in their entire bodies.

Last night Chiara, who will not turn 3 until July 21, decided to exit the house via the garage and mosey on around the corner to the backyard where Dennis was putting lawn furniture back on the deck. I’m amazed that she opted for this route and did not, for example, decide to wander down the street or into traffic. I’m sure if she had any idea that those last two options were even feasible, she would have gone for it without a second thought. We’re thinking about building a moat around the house, but that would just be a gift to her, one more challenging obstacle to figure out between breakfast and snack time.

This third child of ours really should have come with some sort of warning, or at the very least a special instruction manual. Complete strangers will comment that she is a daredevil after being confined just five minutes with her in a place that has anything that can be used as climbing apparatus — chairs, drawers, boxes of baby wipes. She’s tried them all.

Just the other day, I put a two-day-old juice cup up on the second shelf of the hutch in her room to get it out of her reach until I could take it downstairs. When I came back to her room a few minutes later, said juice cup was on the floor — empty. I asked how she got the juice cup, and she said with annoyance, “It was on a high shelf.” So I told her to show me how she got it from the high shelf. Apparently that’s what those three dresser drawers were made for. Thankfully, her dresser is sturdy enough to support a monkey-like girl in full climbing mode.

“I’ll do it myself” is Chiara’s mantra, and she does, whether it means wearing her shoes on the wrong feet or spending 15 minutes getting onto the swing in the yard. I have to admire her confidence and determination, even if it does make me crazy and causes me to call on her guardian angels with an insistency I’ve never before exercised in prayer.

You know your kid is too adventurous when you come out of the shower and run down the hall not because you’re worried she’s awake but because you’re worried she packed a bag and headed out of town. She’s napping as I write this and the house is blissfully quiet, which can mean only one of two things: She’s really tired or she’s finally figured out the deadbolt on the front door.