The world according to Olivia 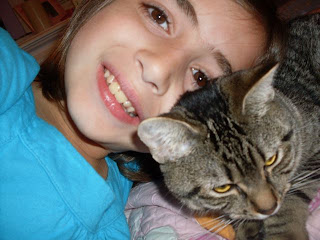 My most recent Life Lines column:

Olivia, our middle child, is one of those kids who can’t see someone hurting without wanting to do whatever she can to make it better. It’s a quality she’s always had. Even back in preschool, I can remember her teacher sitting down at our first conference and saying, “Olivia loves everybody, and everybody loves Olivia.”

Olivia, 9, has a heart of gold. Her love for everybody and everything is the main reason she became a vegetarian almost two years ago and has never wavered. She stated it simply: She did not want an animal to die so she could eat. Where other parents may have insisted she eat what everyone else is eating, we could not. Why? Because there was no denying her decision was pure Olivia, and we weren’t going to squash that spirit.

After our dog died, we told the kids, “No more pets.” But about six months later, as Olivia trolled the website of the local humane society, our resolve began to weaken. “Never” became “maybe,” which eventually became “after vacation,” which finally became “Get your coat; we’re going to the humane society.” We headed there for one cat in particular: Fred, who was described as super friendly and able to get along with kids and general chaos. Perfect for our house. We left the shelter that day with Fred and an unrelated but incredibly cute kitten named Mirabella. Without Olivia’s caring heart and constant badgering, we would not have this feline pair that, I have to admit, adds a little bit of fun to our house despite the damage they sometimes do.

When the Haitian earthquake hit, Olivia saw images of suffering Haitian children on TV and said, “We should adopt a Haitian baby.” She said it not as if she was asking a question but as if she was making an absolute statement. It was beyond difficult to explain to her that as much as we would like to be able to do such an incredibly generous thing, we simply are not in the position to do it. “We have no room,” we said. “Chiara can share my room and we’ll give the baby her room,” Olivia responded. “Adopting a baby costs a lot of money,” we said. “You can have everything in my piggy bank and anything else I get,” she answered.

It was touching and heartbreaking to see how desperately she wanted to help those poor children. Olivia cares deeply, but does she care too deeply? Is it possible to care too deeply? I pondered that and thought about the more radical saintly people of our faith – St. Francis of Assisi, Blessed Mother Teresa, Dorothy Day. These holy men and women would have said, “You can never care too deeply. You can never give too much.” Nevertheless, the ways of the world simply don’t allow us to give away everything when we see people in need. We have to strike a Gospel-centered balance, but that’s not easy.

As we headed to church one Sunday, Olivia and Noah loaded their pockets with allowance money for the Catholic Relief Services collection to benefit Haiti. After a quick mom-dad conference, we sent them back to their rooms and helped them come up with a more reasonable amount. We were trying to honor their generosity while teaching them how to give intelligently and carefully. And they, in turn, were reminding us that we are called to give more with our hearts than with our heads.

I look into Olivia’s eyes and see an ideal, the way we all could be if we lived according to God’s ways and not the world’s ways. And I have a feeling that she’s going to grow up and show me and everyone else that it is possible to live that ideal because Olivia is not going to let a little thing like the world get in her way.

I should have known… An Ode to Olivia

You can’t make this stuff up

October 23, 2010 • Olivia
Take a good look at the photo above. This is a perfect statement on my life at this point. Or a good indication of why my sanity seems to be in constant ...
Read More

Fastest labor in the west