Ready to paddle my way to an unknown adventure 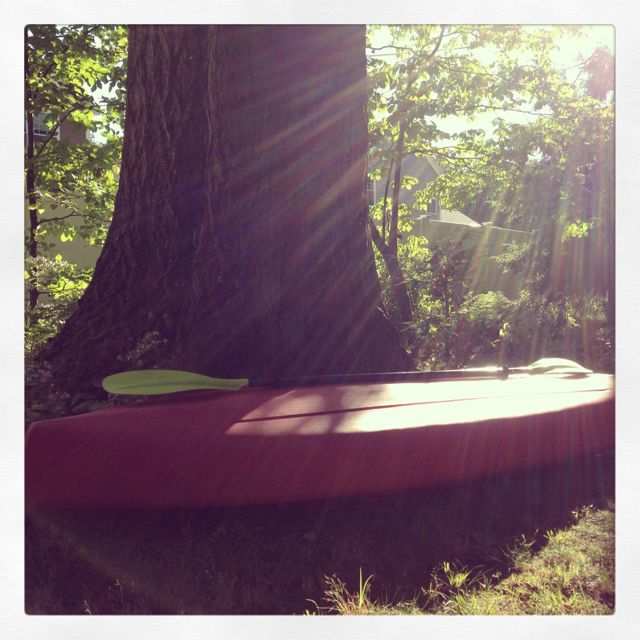 Ever since moving to upstate New York almost 13 years ago, I’ve wanted to try kayaking. Finally, earlier this year, I got my chance when we took Chiara’s Brownie Troop camping up near Lake George. Little Girl Scouts aside, it was so peaceful and lovely as I quietly paddled around in the sunshine, and I knew I wanted to do it again. And I secretly thought, Wouldn’t it be fun to have my own kayak? But how was that ever going to happen when I don’t know the first thing about kayaks?

Once you put a thought out into the universe, however, you never know what might happen. Sometimes, if you’re really lucky and paying close attention, the thing you put out there as a wish comes back to you as a reality. Happened when I said I wanted to go to Italy a few years ago, and now it happened in the form of a kayak. So be careful what you put out into the universe people. Make it something good or fun.

Just a few days ago, out of the clear blue sky, I received a Facebook message from my neighbor: “Do you guys want a free kayak? It’s an 8-footer and broadbased so it’s good for kids. One person – very light. If you want it, come get it. Red!”

It took me about five seconds to respond, “Yes!” Even though I don’t have a roof rack or a life vest or even the slightest idea how to get into the thing without tipping myself over and going head first into the lake, thereby losing my new blue glasses. But minor details have never stopped me from plowing ahead willy nilly with a crazy scheme.

I thought kayak thoughts and a kayak showed up. You don’t say “no” to that. And now, when I look out my kitchen window as I cook dinner, the sight of the bright red kayak and lemon yellow paddle makes me smile because it means I’m bound to find an adventure somewhere around the bend, and life is so much more fun when there’s an adventure in the offing and when we push out of our comfort zone, even if, in this case, that means no more than pushing off the sandy shore of an upstate lake.

So local friends, if you’ve got a kayak or want to kayak or have ever even considered for half a second that you might some day want to try to kayak, send me a message. We will paddle our way toward something spectacular. And I’ll be sure to wear my back-up glasses just in case.