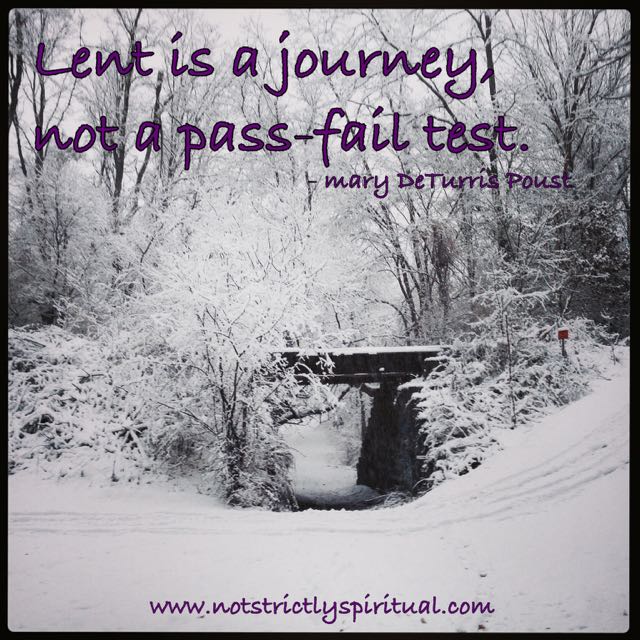 The column originally ran on Huffington Post in 2015, but it’s a favorite so here it is one more time, just in time:

Lent is one of those seasons that always begins with the best of intentions and rapidly goes downhill, at least that’s how it usually plays out for me. I plan to pray more, eat less, and find creative ways to make my favorite time in the Church year more meaningful. Unfortunately, the ashes hardly have time to settle into the wrinkles on my forehead before I’m feeling like I’ve already failed.

But Lent is a journey, not a pass-fail test. Trust me, if it were at all possible to fail Lent, I would have long ago been expelled from this spiritual school. Fortunately, the goal here is not a perfect score at the end of 40 days. In fact, let’s throw out the word “goal” and focus instead on practice — spiritual practice.

1. Don’t start out with an unrealistic plan. Let me give you a peek into my own Lenten insanity. Last year in my spiritual journal, I wrote the following plan for Lent: “Prayer at breakfast; spiritual reading at lunch; no eating between meals; no sweets; check Facebook only twice each day and not at all after dinner; write at least one personal letter to a friend each week.” Let’s just say that if I was having trouble finding even ten minutes a day for prayer before Lent, there was really no chance whatsoever that I was realistically going to do even half of this. And so, within about 48 hours, I had “failed,” thereby giving myself permission to throw my hands up and toss out my Lenten promises. Don’t set yourself up for a fall. You know your limits. Yes, try to stretch beyond what you normally do, but don’t aim for something so spiritually pie-in-the-sky that you can’t possibly see it through.

2. If you’re not getting a lot out of Lent, look at what you’re putting in. Right from the start of Lent I expect to see tangible progress—and fast. But I don’t always want to put in the hard work or go to the uncomfortable places that progress requires. We need to approach spiritual practice the way I used to tell my son to approach piano practice: You don’t get to be an expert by simply sitting close to the lesson books. You have to work at it a little every day. We can make fabulous spiritual plans, but unless we stop all the busyness and spend at least a little quiet time with God in prayer every day, we’re going to have a hard time getting out of the starting gate.

3. If and when you slip up, start over or shift gears. One Lent a few years ago all of my grand plans were waylaid by sick children and my own bout with brief illness. For weeks on end, we had one virus after another keeping us down—both physically and spiritually. Rather than hang on for dear life to what I wanted, however, I began to realize that perhaps my “sacrifice” for the season was to let go of my plans, and accept what was in front of me—my children in need of a mom to comfort them and make them snacks. My Lenten plans were far more selfish than the Lenten reality I was handed. I wanted to lock myself away in silence. Instead I had to give up my quiet time and make time for someone else. So don’t see backsliding as failure but as an opportunity to figure out what your practice should really be about.

4. Don’t use Lent as a way to achieve other goals. When our Lent goes off course it’s often because we are focused on a secularized version of this spiritual season. We want transformation on our own terms. We give up sweets as a Lenten sacrifice but secretly hope we’ll lose a few pounds before Easter arrives. We give up meat on Fridays, but end up paying far more for flounder than we ever would have spent on chicken, defeating the purpose of “sacrifice.” We vow to pray more, but get annoyed when family responsibilities force us to miss daily Mass or our regular meditation time. Where is the still small voice in all of that?

5. When all else fails, just be kinder today than you were yesterday. Can we choose to love others—our family, our friends, the person who just cut you off on the highway—even when it would be easier, and perhaps even justified, to be angry? Can we look for our Lenten path in the worn tread of the carpet leading to the laundry room, in the concrete sidewalk leading to the bus stop, in the long line of cars at the toll plaza? Can we find transformation not on some cloud-lined spiral staircase leading to the sky but on the unswept kitchen floor surrounded by the people we love, who are often also the people who drive us crazy? If we can do that, even if we haven’t managed to follow through on any of our other plans, then we’ll pass Lent with flying colors.