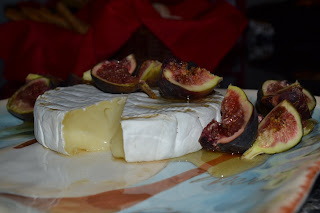 We’ve been bouncing around from state to state this Christmas holiday, so there hasn’t been a ton of cooking going on here, but I thought I’d at least share this lovely photo of an appetizer I made on Christmas Eve. Truth be told, the photo is better than the actual food result, but I think with some tweaking it could be totally awesome.

Take a small wheel of brie or triple creme cheese and grill it lightly or put it in a panini press until it’s warm and has light grill marks. (I opted for the panini press method since it was a little chilly for grilling at night.)
Meanwhile heat about 1/4 cup of honey over low heat with a few sprigs of fresh thyme. Turn it off when it gets near a boil and let it sit and steep a bit.
Slice up a few fresh figs (five or six)

Put the warm cheese on a platter, top with figs, drizzle with honey.

So I think our version could have benefited from better brie (I couldn’t get true French brie. Well, I could — and originally did — but it’s a long story.) I needed fresher thyme and more of it to infuse the honey. And it was my first time buying/serving figs, so I’m still not sure if I picked them at the right ripeness or if I should have done this when it was fig season. Anyway, I’ll try it again at a later date. If you give it a shot, let us know what happens.

This recipe, by the way, originally came from the website Not Without Salt. Check it out.

Commit to spiritual self-care this Advent

December 8, 2020 • Advent, Life Lines
Advent in our modern world has long been behind the cultural eight ball. It’s a season of waiting in a world of instant gratification, a season of quiet ...
Read More