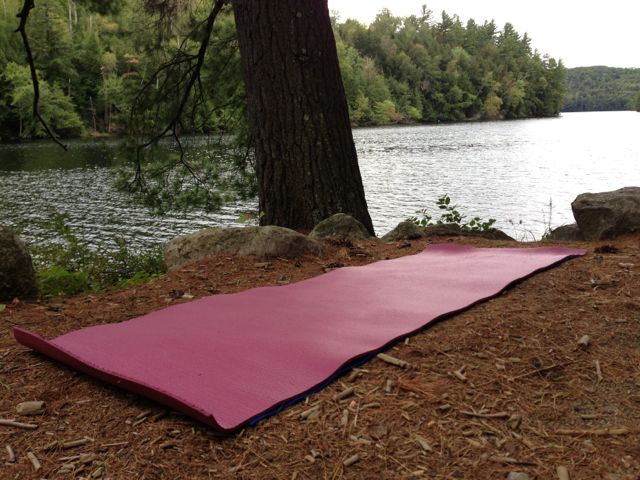 When I was packing for retreat, I seriously debated bringing my new salmon-colored Wildwood hoodie because I didn’t want to ruin it. I know. If I think my Jersey Shore hoodie is too nice for my Adirondack silent retreat I’ve got some fashion issues that need to be dealt with, but that’s a post for another day. Anyway, first day on retreat I put on my pretty new hoodie and headed to the dining hall for a cup of coffee, which I planned to sip lakeside in silence. Sounds perfect, right?

I didn’t get off the dining hall porch before spilling my steaming cup of coffee down the front of my new hoodie. Now, back home, that would have prompted some cursing and me calling myself an idiot a few times. But on silent retreat it just caused me to silently say, “Really?” and shake my head. I tried to sit by the lake and think about God and not about whether I had brought the travel stain stick with me. And I was pretty successful. Okay, moderately successful. Then I ate breakfast and got a second cup of coffee. AND DID THE EXACT SAME THING. Not kidding. Spilled it all over me. Got my pants that time too. Now it was getting ridiculous. And that’s when I realized that maybe the whole point was to remind me that I wasn’t wearing fabric threaded with gold; I was wearing a sweatshirt that some 16-year-old boardwalk worker emblazoned with a Wildwood patch. Maybe I needed to not hold on so tight to the stupid stuff.  And walk slower. Got it.

Later I decided to do some yoga outside. I changed into flip flops 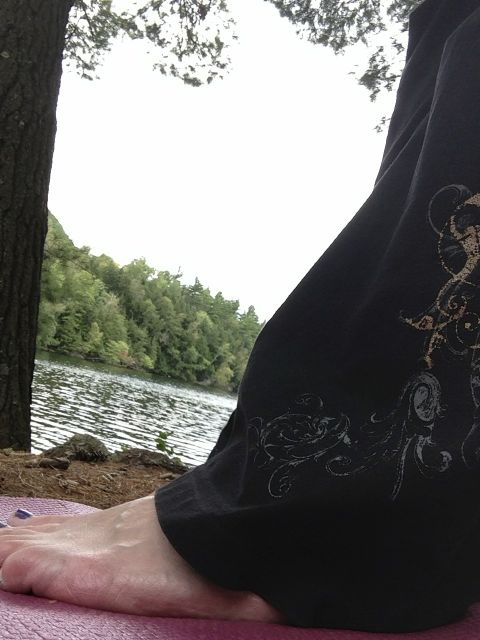 and yoga pants (still wearing my hoodie, of course) and headed into the woods to search for an empty dock on the lake. But every dock was full, so I finally decided to clear away some branches and put my mat down on pine needles right at the water’s edge. Beautiful. I did sun salutations. I did crescent moon. I did tree, standing there silently amid the pines as if I was one of them. It was very cool and I was feeling pretty dang at one with nature and God. Until I put my hand in a patch of poison ivy. Not to worry. I’ve never had it before, probably immune, I thought. So I sat to meditate. Attacked by ants. Okay, fine. Still breathing, still one with nature. I got up to roll up my mat and brush away the ants, bent over, and a giant cicada-like bug fell out of my curls, where apparently it had decided to nest. At this point, I was not so silent, but I was laughing.

God has a way of taking us down a few notches when we’re getting caught up in the stuff that really doesn’t matter (hoodie) or stuff that seems spiritual on the surface (yoga in the woods) but is really more about style than substance. As I walked away with my stained hoodie tied around my waist and my ant-covered yoga mat under my arm, I had to admit that the little annoyances that seemed at first to be pulling me away from my serenity were actually pushing me toward peace, toward letting go, toward lightness.

For most of the first day of my retreat, I had convinced myself that I didn’t really feel like kayaking — even though I really, really wanted to kayak. Weather wasn’t great. I really needed more time just sitting in a chair thinking and praying. Not sure I could lift and launch a kayak alone and couldn’t ask anyone for help. I had a lot of reasons. But the real reason was that I was scared. I was afraid I’d look stupid trying to figure out how to get myself and my kayak in the lake. (I’ve only kayaked once before and that was at Girl Scout camp with lots of helpers around.) I was afraid I’d tip the kayak over, maybe even far out in the empty lake with no one around to help me. I was just plain afraid.

But after the yoga escapade in the woods, I suddenly didn’t care about any of it. I walked to my car, tossed my mat in the trunk, and went back and dragged a kayak from the rack. And once I was in the middle of the lake, all alone save for a couple of beautiful loons paddling along not far from me, I realized I needed all those stupid things to happen to push me out of my comfort zone, to remind me that this wasn’t about the clothes I was wearing or the setting of my yoga session. It was about getting right with God and letting go of my fears. And maybe, just maybe, I needed to focus more on the interior stains and scars and bugs that aren’t so easily washed or brushed away.

But, just for the record, the coffee stains came out.

Where is the beauty in your world?

June 15, 2022 • Everyday Divine
As I was sipping coffee on the deck this morning, phone in hand, crossword puzzle in front of me, I suddenly stopped and looked up. In that moment, ...
Read More

A mountain retreat: Find your stillpoint

August 19, 2020 • Everyday Divine
After months of wondering whether my retreat would be on or off due to COVID-19, I am happy to report that it is ON, and Pyramid Life Center is ready to ...
Read More

July 24, 2017 • Everyday Divine
About one week ago, our dishwasher died. Well, it didn't die completely; it just shut down mid-cycle no matter how many times we tried to make it work. And, ...
Read More