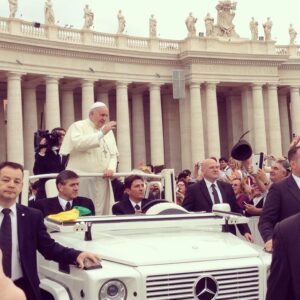 I’ve kept quiet through a lot of the ridiculous stuff that goes on out there in the media world lately. To be honest, I just don’t have it in me anymore to bang my head against the wall of the blogosphere, but today I just can’t keep quiet. One word: EVOLUTION. Why, why, WHY is this breaking news? Don’t get me wrong, I LOVE Pope Francis. (See that photo over there on the left? I took it when I was THIS CLOSE to the pope two weeks ago. If I’d been just a little bit unhinged, I could have jumped that barrier and been in his popemobile. But I digress…) I love Pope Francis. (Remember my post from when he was elected, “My Pope Crush: He Had Me at Hola”? Oh wait, I’m digressing again.) So, anyway, I love Pope Francis, and I appreciate the fact that he wants to get the truth out there, but the truth is that his statements on evolution and the Big Bang theory are not new, not even close. The fact that the press — and a good chunk of the world, I guess — don’t seem to realize this and thinks the pope is making some landmark statement is just mind boggling to me.

But this whole scenario has played out again and again ever since Pope Francis stepped onto that balcony. Our teachings on caring for the poor, loving others, prayer, kindness, the environment, the family, marriage, you name it are all the same as they were when Pope Benedict XVI was pope. In fact, I bet if I gave you a quiz with B16 quotes and Francis quotes you’d be hard pressed to guess which was which. Granted Pope Francis is a PR genius, and he is warm and welcoming and sort of seems like a kind old grandfather, but enough is enough. We have a lot of cool teachings that no one has bothered to read about or listen to. Until now. And only if Pope Francis says them. If you’re interested, check out my book The Complete Idiot’s Guide the Catholic Catechism. It’s chock full of shocking teachings, including our teaching evolution and how it does not contradict our faith. Go figure.

Oh, and FYI: The originator of the Big Bang theory was Jesuit priest and astronomer Georges Lemaître. File that in your back pocket for when you’re on Jeopardy or something.