Reflections on Genesee: the lessons unfold 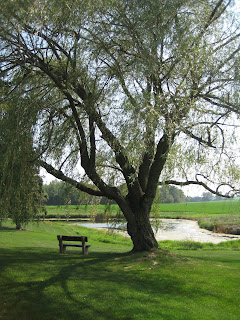 Is it possible a full week has gone by since I was on retreat at the Abbey of the Genesee? Time moves so quickly, especially when time includes three kids going back to school and the start-up of Daisy scouts, Cadettes, Boy Scouts, soccer, dance and more.

The silence and solitude of the abbey seems so far away right now, and, yet, in a way, it is still will me, which I guess is testament to the fact that this retreat was a powerful experience for me. I’m close to saying “life-changing,” but I still haven’t decided if that’s the truth or just my imagination and ego talking. Things churn slowly after silent retreat, and more things are unknown than known. In the best possible way.

During my days at Genesee, I spent a lot of time sitting on a bench under a willow tree (as seen in the photo right here), staring at the pond and the distant fields and just waiting for that still, small whisper of the Spirit. The awesomeness of God’s creation, even when it’s baking under a 90-degree day, is so much a part of the prayer experience for me when I’m on retreat. The sunrises and sunsets, the flowers and plants in every stage of blooming or dying back, the animals scurrying around, the moon rising in the night sky — every single moment seems to speak of the Spirit, something I don’t always notice when I’m rushing past the natural beauty of my own backyard.

To be perfectly honest, I’ve been somewhat quiet about my retreat because I feel protective of what happened there. To speak it would be to diminish it in some way, and so I’ve been laying low — staying off Facebook except to post blog links, staying 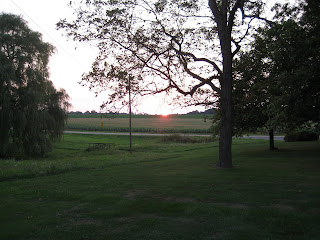 off my own blog except to give factual details rather than spiritual insights. One thing I will say for sure: Everyone should experience one weekend of silence and solitude a year (two, if possible). I felt that way when I went on silent retreat two years ago. I feel it now. Being away from everything, unplugging from the noise and the constant distractions, is good for the body, mind and soul. And if you are willing to let it all go, the Spirit will eventually make itself heard. Not necessarily easily or quickly or loudly, but one way or another, the Spirit will be there.

I’ll share one spectacular moment from my retreat. When I first arrived, I wondered what I was doing there. Why not just go home and use the time to clean my house, catch up on work, hang out with Dennis and the kids? There was a moment when I actually considered getting back in the car and just driving east. But I knew that was fear of silence talking, fear of hearing something I might not want to hear. So I stayed and I prayed. And prayed. And many times, despite the beauty of the monks’ chanting and the wonder of creation, I felt nothing. But I persisted — because what else could I do? This was why I was here. I knew it wouldn’t be easy.

With each hour of the Divine Office, I could feel myself settling into the rhythm of the day that is the monks’ entire life. I looked forward to the next hour, the next Mass, the next chance to sit in the silence of the chapel and wait for the monks to enter and begin their singing and praying. By Sunday morning, I felt at home and was sad to know I was leaving for at least a year. As I stood in the bread store, waiting to buy monk-made cookies for the kids, I couldn’t help but feel a little selfish for taking this time for myself when Dennis was home with the kids dealing with real life. Just then, as if to answer the nagging question still hanging around the edges of my mind, an old monk left his post in the “porter” office and came over to me in the store.

“You are doing everything you need to do to make a good retreat,” he said, out of nowhere. And right then the Spirit felt closer than it has ever felt.

His name is Brother Christian, and in the silent abbey where contact with the monks is so limited, I was given this rare opportunity, this unexpected gift, right when I needed it most. It was one of the highlights of my retreat because it was an affirmation of my decision to be at the abbey that weekend, and a reminder that even when we don’t think we’re making progress in prayer, if we are praying at all, that’s progress.

I drove home wrapped in this knowledge, with the words of Brother Christian echoing in my head. Then, when I got home, I googled Brother Christian’s name because I had promised to send him a copy of my book, Walking Together (which he said he wanted to read). It was then that I realized that “my” Brother Christian was also Henri Nouwen’s Brother Christian, the monk he wrote about in Genesee Diary, the monk who helped him when he couldn’t keep up with the bread making, the monk who made him a special monastic tunic so that he could feel more at home on his extended stay at the abbey.

And I felt my heart burst open. What absolute grace to be encouraged by this very same monk, to be singled out and prayed for by the man who once encouraged and prayed for Henri Nouwen. It occurred to me that Nouwen gets all the notoriety for his spirituality and his writings, and yet it is the quiet monk like Brother Christian who is silently but powerfully shaping people’s spiritual lives, unknown to the rest of the world. I know that my Genesee experience was cemented by the personal connection I now have with those holy monks, some — like Brother Christian — who’ve been living that life of silence and solitude for more than half a century.

“Teach us to count our days aright, that we may gain wisdom of heart.” — Psalm 90