Mindfulness Bell: The Sound of Silence 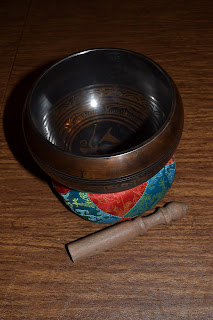 I have a little (easy) exercise for you to do today, or this morning. For the next few hours, pay attention to all the noises you hear. Not just the talking from the next cubicle or the voice on the other end of the phone, but the smaller, less obvious noises.

The ding of emails coming in, tweets being posted, texts being sent, Facebook chats being initiated.

The melodic tune played by the washer and dryer when they finish a cycle. The whir of the dishwasher. The rat-a-tat-tat of construction workers. The music on the car radio. The honking horn of the truck behind you.

Whatever sounds float your way, make note of them.

How many of those sounds stir a little angst in you, maybe without you even realizing it at first? The email dings, and you worry that it’s about that project you’re struggling with. The phone rings and you fear one of the kids is calling from the nurse’s office. Now, how many of those sounds can you remove from your life? Some of them are easy, others impossible. But begin to turn off the unnecessary stuff.

I recently went into my program preferences and turned the audio off on my emails, instant messenger and other programs so I won’t be distracted by the constant dinging of work piling up as I try to write a book or do yoga or meditate. (Coffee maker just beeped as I was writing that last word.) Clearly, some sounds we just have to live with, but we can begin to actively work to quiet our world, and our lives.

In keeping with all of this, I decided to add one sound to the mix in order to bring about more silence.

Sounds contradictory? At first it felt that way, but now it is doing exactly what I had hoped it would do. About a month ago, I downloaded something called the “mindfulness bell” after seeing it listed in the resource section of a book by Buddhist monk Thich Nhat Hanh. The idea was that the bell, which sounds like a Himalayan singing bowl being struck just once, would ring at the top of every hour as a reminder to stop for just a few seconds and re-center myself, whisper a short prayer, and move on. I also activated a second bell program that would ring at the start and end of a set 20-minute time period, figuring this would be my meditation marker so I wouldn’t always be wondering if I’d reached 20 minutes yet, which can be very distracting during meditation. (Not that I can fit in a full 20 minutes very often.)

Well, somehow I did something that had these bells ringing a little too frequently. At first I found myself frustrated. Bells, bells, bells. This wasn’t making me mindful; this was making me crazy. But then I clicked around and got it to where it needed to be. Once an hour. Now I’ll be working away, looking at my deadline board, feeling a little frantic, and the bell will ring. My shoulders sink away from my ears and the furrow on my forehead smooths and I breathe.

“Lord Jesus Christ, Son of God, have mercy on me, a sinner,” I whisper before I return to my work.

Yesterday afternoon, as I was chopping vegetables at record speed and throwing them into the slow cooker in a desperate attempt to get dinner made before I had to run out the door, I heard the bell ring from a floor away, and I smiled. Suddenly my chopping became less manic and my breathing slowed and nothing seemed quite so urgent. In a short time the bell has gone from unnerving to comforting.

Obviously this kind of thing resonates with people. Just two days ago I posted a brief Facebook status update about my mindfulness bell experiment and the next thing I know it showed up in a blog post. In our chaotic and noisy world, people are hungry for whatever they can find that will bring them back to the still point, that center of calm in the midst of life’s storms.

The trick is to learn — eventually — to allow all those other noises in our lives to become mindfulness bells in their own right. When we become centered enough, through prayer and awareness and, well, mindfulness, evening the dinging and honking and beeping can become calls to calm.

Pick one of the noises you can’t turn off and make it your own mindfulness bell.

Every time you hear it, stop for a second and breathe deep. Maybe whisper a prayer or a word that calms you. Find that place of silence you crave.

My mindfulness bell just rang downstairs. I’m not kidding. I think that’s a sign to end this post and have my silent meal before setting to work. Peace.

Multitasking is not a virtue: new podcast episode

April 25, 2022 • podcasts
We live in a world where we are expected to do two things at once, or ten things at once. Multitasking is seen as a virtue, something that means we are ...
Read More

A little spiritual respite in the form of guided meditation

March 21, 2022 • YouTube
We all need a little time apart, a little time in silent meditation, but that can be challenging. Our mind wanders; our thoughts race. Let me guide you to a ...
Read More