An embarrassment of prayer riches 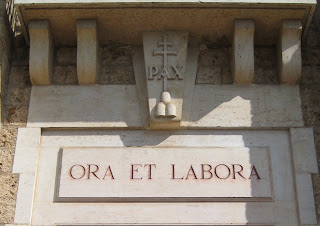 Okay, so here’s the deal. About a week ago, I was in a weird place. Due to a confluence of events, I found myself wondering — seriously — if perhaps I’d said all I had to say, in terms of my Catholic writing. I was thinking maybe it was time to hang it up. I actually suggested to Dennis that perhaps I would go over to Hewitt’s (our local gardening place) and see about a job there, as I have no other skills beyond writing, talking, writing, talking.

So, as I pondered all this and made Dennis absolutely crazy, I prayed. I asked God for some sort of sign that my writing wasn’t in vain, that I was supposed to keep going, that the people in my life aren’t just some figment of my imagination but really, truly have an interest in and care about my work and, well, in me as a person. I even emailed one friend asking for prayers and said that I wished God would write me a letter, spelling it all out in black and white so there would be no mistaking the message. That was last Wednesday and Thursday.

Fast forward to Friday. A letter arrived. From a religious sister I once worked with at my first job in the communications office of the Diocese of Metuchen. I haven’t seen or heard from this sister in about 25 years. She keeps up with my life through my Life Lines column, which runs her diocesan newspaper, The Catholic Spirit. Here’s a snippet of what Sister Michaelita wrote: “Your efforts to lead a prayerful life amidst all your responsibilities and the demands that are made upon your time have truly impressed and encouraged me.”

I “encouraged” her? I was somewhat stunned, but so happy to hear from this long, lost person from my past. I really didn’t think anything more of it, beyond deciding to send her a copy of Walking Together.

On Saturday, I opened the mailbox and found a card from a fellow Catholic blogger, someone known for her knack for personal note-writing, but, still. Today? Right now? Fran thanked me for all I do and for my life “as a sign of Christ.” Wow. The card included a quote from St. Francis de Sales (one of my all-time favorites) about entering into silence (one of my most recent quests). Perfect.

I still wasn’t catching on…

No mail Sunday, but then came Monday. Two, count ’em, two personal letters arrived. One was a note from my friend Maureen, which, among other things, offered encouragement as I embark on two big writing projects. The other was from Brother Christian, the Trappist monk I met on retreat last month. “See Jesus and Mary everywhere and adore their wills lovingly, and you will be a saint,” he wrote, in a handwritten card that also included a 1973 clipping about him and his monastic life and a page from a book on St. Therese.

As if that wasn’t enough, I received two email notes from spiritual friends I’d included in my book on friendship — one encouraging me in my work, the other offering prayers as he headed to a five-day hermit retreat where he would be in total silence and solitude.

Now I was getting suspicious. I had prayed for a sign, I had wished for a letter, and suddenly there were letters coming every day. And not just any letters. Letters that offered encouragement, prayers, friendship, inspiration. Suddenly I was overwhelmed by what God was doing for me in the most obvious and concrete ways. So often I whine about not knowing what God wants, never being truly sure if I’m doing His will or my own in disguise. This didn’t leave much room for doubt.

I thought that was the end of it, but Tuesday came along and the phone rang. I almost didn’t pick it up because I didn’t recognize the name, but I went ahead anyway. The woman on the other end had made a Cornerstone retreat with me several years ago, and we see each other once in a while after Mass. She’d never called my house before, so I wasn’t sure what she could possibly want or need.

She called, she said, to let me know how much she enjoys and appreciates my work. She apologized for not getting to a recent talk I gave at my parish and then stressed again the importance of my work. What are the odds? That call was really the icing on the cake. I felt humbled by the embarrassment of riches God was showering down on me. All I could do was say thank you and decide that maybe, just maybe, I am already doing what I’m meant to be doing, struggles and all.

All I can say is “thank you” — to God, for sure, but to all those people who, without even realizing it, gave me the answer I was desperately seeking. Not only the people who sent me letters or made phone calls, but all those friends who constantly but quietly support my work and encourage me on my spiritual journey. You are blessings in my life, each and every one of you.