A little honesty from the back row of yoga class 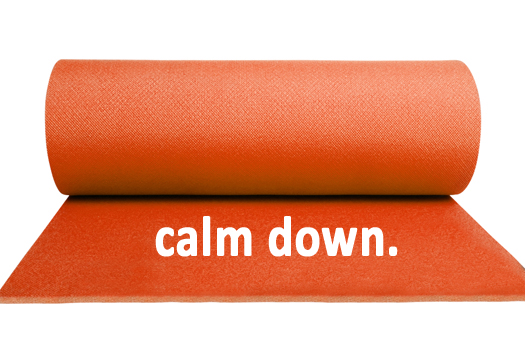 I returned to yoga class this week after a long hiatus, and while it was sooooo good to be back on my mat, it wasn’t without its challenges. But probably not the challenges you would expect. When it comes to my Y-based yoga classes, my struggles have less to do with balancing and strength poses and more to do with other people. I know, that’s probably not something I’m supposed to admit when I’m trying to reach some higher level of spiritual development, but I think a little honesty is a more direct route to that spiritual place than total denial and the inner wailing and gnashing of teeth. If you’ve ever taken a yoga class, I guarantee you know what I mean. Hear me out…

The other night, for example, as we neared the last few minutes of class and prepared for savasana (corpse pose) and a little meditation and relaxation, the teacher specifically asked that anyone who might be leaving early or needing to move around do it BEFORE the meditation began. She asked that any jangling keys or ripping velcro be fastened and clipped and silenced so the rest of the class could enter more deeply into the stillness. As I laid there with my eyes closed, focusing on my breathing, I could hear — about two mats away — a non-stop stream of exactly the noises the teacher had asked everyone to avoid. I could hear keys jingling and jangling for who knows what reason. I could hear the same person opening and closing some sort of Velcro fastener. I could hear someone milling about, and someone else saying, “Shhhh!” over and over, which was almost as annoying as the jangling keys.

All through this, I was on my mat attempting to relax and enter into meditation but really focusing all of my energy on the noise and the fact that no one seems to be able to be still and shut up anymore. Yes, I was in yoga class thinking, “Shut up, just shut up.” Which is really not what you’re supposed to be doing with your energy when you’re in a yoga class.

Fast forward to this morning’s 5:45 a.m. class. I found my usual spot in the back row, over near the corner, and settled in. The lights went out and the teacher asked us to lie on our backs, close our eyes, and focus on our breathing. (In those early morning classes, the meditative part often starts the class rather than end it.) Anyway, I was breathing and focusing when along came a latecomer, rolling out her mat, kicking off her shoes, and jangling around just a foot or so from my head. Sigh. And not the good kind of sigh.

She then proceeded to cough and sniffle and blow her nose and struggle for air for an hour. What was running through my mind was not “Om” or “Shanti” but “Really?” and “Are you kidding me?” and some other unprintable but colorful silent thoughts. When I should have been focused on keeping my Tree pose upright or my Warrior pose strong, I was focused instead on how quickly I could get home and get a shot of Vitamin C to ward off whatever was making this person so miserable. The most positive thought I could muster was the slim chance that it was allergies, despite the 35 degree temperatures outside.

As I felt annoyance and a teensy bit of anger rolling around in my head while I moved from pose to pose, I was confronted with the uncomfortable reality that maybe, just maybe, the lessons I’m supposed to taking from yoga are not necessarily about whether to face my palm up or down or tuck my chin on specific poses but about how to accept what’s going on around me and let it go without frustration, without feeling put out, without feeling as if my right to a spot on that floor outweighs my sniffling neighbor’s right to be on that floor.

This is the real work of yoga, as any yogi will tell you. Everyone else thinks it’s about the poses and what’s happening on your mat, but it’s really about the interior movement and what’s happening in your heart. The poses just help you become still enough to realize that. Although if we could all put our keys and Velcro away for one hour, it would really help. Power to the Om.