Pilgrimage: A journey of the heart and soul 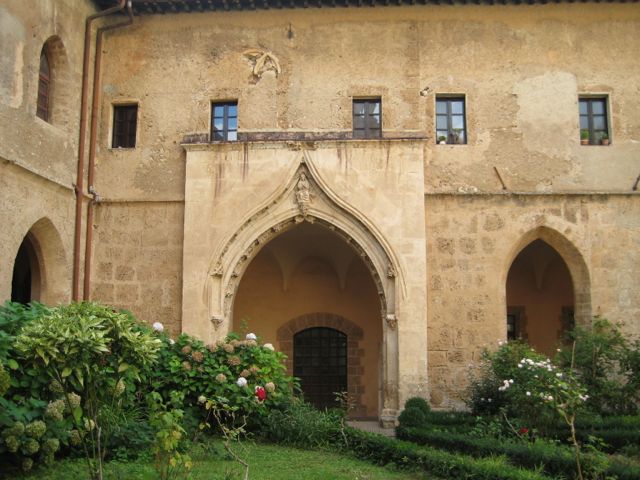 It’s easy to romanticize the idea of a pilgrimage, to turn it into something larger than life, something we think we can experience only when have the money, time and stamina to travel to a far-off country to see one of the great spiritual sites. We imagine Lourdes, the Holy Land, Rome, Assisi, and file our pilgrimage plans away on some sort of spiritual bucket list.

But the reality is that true pilgrimage doesn’t require a passport. In fact, it doesn’t really require any travel at all. True pilgrimage is as much an interior journey as a geographical one. If we approach our entire lives with a pilgrim mindset, we can find places that will feed our hearts and spirits just about everywhere we turn – from the little shrine in the next town to the cathedral in our diocese to that historic church near our favorite vacation spot.

My first “real” pilgrim journey was to the National Shrine of the North American Martyrs in Auriesville, New York, where St. Kateri Tekakwitha was born and where Jesuit missionaries St. Isaac Jogues and St. Rene Goupil and lay missioner St. John Lalande were martyred. Although this beautiful and sacred place overlooking the Mohawk Valley is only 45 minutes from my home, it took me eight years to “discover” it, and even then it was only because I was joining my son’s Boy Scout troop for their annual retreat.

Walking on holy ground, praying with other pilgrims, sleeping in a tent not far from the ravine where Rene Goupil died for the faith gave me my first taste of just how powerful the pilgrim journey can be. I felt a sense of oneness with everyone around me, with all those who came before me and all those would come after me.

Pilgrimage has the power to take our spiritual journey to a new level, but without careful and prayerful planning, a pilgrimage can quickly go from spiritual bliss to tourist nightmare.

I was fortunate to go on a 10-day trip to Rome in 2010. It was not arranged as a pilgrimage, and yet I hoped that’s what it would become. It didn’t take long for me to realize that without a willingness to step outside the tourist box, my “pilgrimage” was going to turn into a parade of indistinguishable ancient churches. Even my first trip to St. Peter’s Basilica at noon on a Tuesday left me somewhat disappointed. I was crammed against thousands of other tourists, unable to get near Michelangelo’s Pieta or the main altar. I vowed to come back and experience the basilica as church rather than museum.

The next morning at 7 a.m., I returned to St. Peter’s with a friend. In each of the more than 40 chapels lining the sides of the basilica, priests, many of them tourists themselves, were celebrating Mass in their native languages. We became a congregation of two in one chapel where a Nigerian priest was offering Mass in Italian. This was the St. Peter’s I had longed to experience, one where the heart of the Catholic faith could be felt beating powerfully in the familiar refrains of the Mass, even if the languages were unfamiliar to my ears. 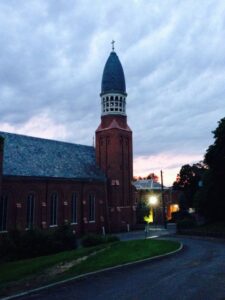 get a true pilgrim experience. Talk to locals and find out when the church or shrine is less crowded. Ask when Masses or other special services will be celebrated. Try to enter into the local community’s celebrations rather than watching from the outside. It can make the difference between going home with nothing more than a few nice photos and going home with a sense of spiritual renewal.

If you don’t have any plans to travel to a pilgrim site in the near future, look for opportunities closer to home. There are so many wonderful Catholic shrines, churches, monasteries, and chapels to explore, some probably right in your own backyard. That church in the photo on the right is just across the Hudson River from us. Dennis and I spotted it one evening after a dinner out. As I stared off at its spire in the distance from our spot along the Corning Preserve, I wondered aloud what church it might be. Dennis suggested we just get in the car and find out. So we did. A pilgrim moment right at home.

If all else fails, become an armchair pilgrim. Read pilgrim accounts of places you’d like to visit one day and begin to plan. That’s what I did with Assisi. I read and I dreamed and I hoped — for years. And now I am packing my bag and heading back to Italy in two days. God willing, my Assisi dream will become a reality later this week, when I visit the sacred city of Francis and Clare. But my pilgrimage to Assisi really began long ago, long before I ever purchased a plane ticket, because pilgrimage is not just about physically traveling to a different place. It’s an interior journey that requires no passport.

Appreciating the masterpiece that is your life

May 27, 2018 • Life Lines
When we returned from a weeklong family trip to Rome, several friends asked me to name the one monumental moment from the trip, the standout thing that made ...
Read More