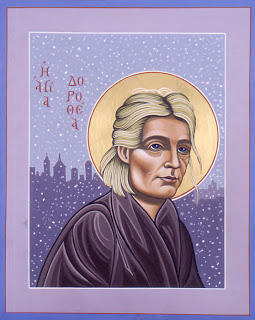 I was happy to see a front page New Times story on Dorothy Day this morning when I came down for coffee. Of course, I began reading with trepidation, waiting for the other shoe to drop. Didn’t take long. By the first line of the second paragraph, I was annoyed by the lack of understanding of all things Catholic:

“But Day has found a seemingly unlikely champion in New York’s conservative archbishop, Cardinal Timothy M. Dolan, who has breathed new life into an effort to declare the Brooklyn native a saint.”

“Unlikely champion?” Really? Dorothy Day lived what our Church teaches, and although Cardinal Dolan may make headlines for his statements on abortion and contraception and other “conservative” issues, he also preaches on the rest of Catholic teaching, which isn’t flashy enough to make the front page — things like poverty and immigration and war, things that Dorothy Day made the center of her life’s work.

I find it funny that the Times, with all its great authority, still doesn’t understand some of the most basic things about Catholicism and about the people we call saints. My goodness, they don’t come more radical than Francis of Assisi and look how popular and beloved his is. He stripped himself naked in the middle of town when he renounced his family’s fortune. He was, like Day, radical about poverty and yet firmly entrenched in Catholic teaching and faith. Let’s face it: All saints are radical. You don’t get to be a saint by being lukewarm about anything.

Then we get a little deeper into the story where the Times talks about Day’s canonization “even though, as some bishops noted, she had an abortion as a young woman and at one point flirted with joining the Communist Party.” Yeah, okay, please see above paragraph. Of course she can be a saint even though she had an abortion. We are a faith of forgiveness. St. Augustine, anyone? That’s what makes her story so powerful. Conversion to Christ transformed her life.  (P.S. When I was young I once went to a Cesar Chavez boycott-grapes rally in Austin sponsored by the Communist Party, so if I’m up for sainthood at any point, please be aware of this skeleton in my closet.)

Here’s a fun sentence from the New York Times story:

“Cardinal Dolan is often depicted as one of the most visible symbols of the rightward shift of America’s Catholic bishops.”

Depicted by whom? The Times, I guess. If they think Cardinal Dolan is a symbol of the “rightward shift,” clearly they need to meet some other American bishops. Give me a call; I have a list of names.

Finally, if you make it to the jump of the story, there’s what may be my favorite part, where the Times says that promoting Day’s sainthood “is politically useful” for Cardinal Dolan. Sigh. Cardinal Dolan is the third Archbishop of New York to promote Day’s cause for canonization. Cardinal John O’Connor and Cardinal Edward Egan also promoted Day’s cause. Three very different men in three very different times. Sometimes a cause is just a cause.

Here’s a snippet of what Cardinal Egan said back in 2005:

…the parish priest who had encouraged me to enter the seminary gave me a copy of “The Long Loneliness” and told me to read it and tell him what I thought of it. I do not recall exactly what I told him, but I know what was in my head: “This is a saint if ever there was one.”

Here’s what Cardinal O’Connor told the New York Times in 1997:

The Cardinal first raised the idea of sainthood for Dorothy Day a decade ago, but at the time he went only so far as to ask for comment from parishioners and others. In his homily yesterday, the Cardinal said he had received many letters as the centennial of Miss Day’s birth drew near, one from a supporter who called her ”the Mother Teresa of Mott Street.”

”And the more reading I’ve done, the more saintly a woman she seems to me,” the Cardinal said.

So Cardinal O’Connor — who was also “depicted” as a conservative — began the first steps toward Day’s canonization 25 years ago, during very different political times. So much for that argument.

Regardless of whether you agree with the push for Day’s sainthood — and there are many among her followers who are uncomfortable with the idea — these basic misunderstandings on the part of the Times about simple Catholic thought and teaching take what should be a story of faith and Gospel teaching and turn it into politics and calculation.

February 3, 2021 • saints
These days — especially in the time of COVID — throat blessings are hard to come by. No, make that near impossible. It’s just not that common anymore, even ...
Read More

October 15, 2019 • saints
The feasts and celebrations that surround us at this time in the liturgical year can do a soul some much-needed good. It’s hard to feel like a solitary ...
Read More