Happiness and heartache on the confession line 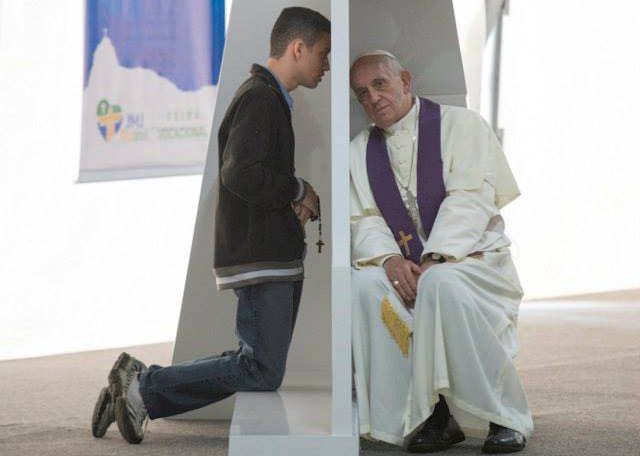 I am one of those people who actually enjoys confession, hard as that may be for some to believe. It’s such an uplifting feeling, to bare you soul, receive absolution, and, as my confessor said this past week, “begin all over again.” And that’s the reality of it. Every time we leave confession, we leave as a new creation, in a sense, with nothing weighing us down or holding us back. Until we sin again, which we will inevitably do because we are human, and then we start the clearing and cleansing and healing process all over again.

In light of all this, I was oh-so-happy, when 9-year-old Chiara came out of confession last week and announced, “That made me feel really happy!” Exactly. That’s what confession should do. She even said the priest gave her “good advice.” You can’t ask for more. I went to confession right after her, and I had the exact same feeling when I re-entered the chapel.

Unfortunately, not everyone at the service that day — almost no one, to be honest — got the memo on the meaning and significance of this sacrament. Or how to behave in a church. This particular reconciliation service was designed specifically for the fourth-grade faith formation class. At our parish, parents are able to choose whether a child receives the Sacrament of Reconciliation in second grade or fourth grade. We opted for the former, so this was not a first-time sacrament for Chiara, but for many of the children attending that day, it was. And so it should have been a big deal, an important step in their spiritual life, but it was more like a circus than a sacred event.

Families were invited to attend with their children and were encouraged to go to confession as well. After a brief Scripture reading and reflection, our pastor reminded everyone that we were in a chapel and the time waiting for confession should be spent in silent and thoughtful prayer in preparation for the sacrament. Then he left and went to our larger church to hear confession while two other priests waited in reconciliation rooms just off the chapel. Children lined up against the wall, parents sat back in their chairs, and that’s when the mayhem began.

It felt more like I was sitting in the bleachers at the Little League field than in front of the tabernacle in church. The folks behind me were talking — loudly — about grocery shopping and vacation. A good number of the kids were twirling around, laughing and jumping, doing push-ups against the chapel wall, and only one teacher attempted the Herculean task of trying to quiet the kids while their parents sat a few feet away oblivious and talking a mile a minute. There was a moment when I actually considered taking my three kids off their various confession lines and and returning another day. It was that bad. I was racking up sins even as I sat waiting for my confession. Let’s just say some of my thoughts were less than charitable.

How did we as a Church and a society get to this place — where there is no sense of the sacred, even when we’re sitting in a chapel waiting to receive a sacrament? It was depressing and deflating. I’m used to the cavalier attitude of the teenagers in my ninth-grade faith formation class, but seeing it from my fellow parents just drove home the fact that we have a lot of difficult work ahead of us if we want to reach adult Catholics who no longer understand the basics of the faith they apparently want to pass onto their children.

Only three parents, myself included, stayed to go to confession after the children were finished. Everyone else had coats on and keys ready as the boys and girls exited the reconciliation rooms. We teach our children by example, so for most of those children, the clear message was that confession doesn’t matter. Somewhere along the way, I’m assuming their parents got the same message.

We so desperately need to re-catechize the parents of children in our faith formation programs, and this was the perfect opportunity, a teachable moment tossed to the curb. Here we had a captive audience of adult Catholics, many of whom may not be practicing but could possibly be hungry for spiritual nourishment. Had the time waiting for confession been coordinated in a way that reinforced the need for silence and prayer, or had there at least been a warden in the chapel to give chatty parents the stink eye, perhaps we could have conveyed the sacredness of the moment, or even better, we could have made the moment something that would offer these obviously frazzled parents a slice of sanity amid the chaos of their lives. Prayer and confession can offer that, but only if we stop talking long enough to hear the sounds of silence, only when we realize that if we just take a moment to focus on something bigger than the grocery list or the summer lake house, we just might find the perspective we need.

If you haven’t gone to confession this Lent, find a parish near you that has convenient hours this week and give it a whirl. Even if you’re a bundle of nerves going in, you, too, just might come out smiling and realizing you feel real happiness for a change. Not the happiness that comes from scoring a great sale at the mall or watching your kid hit a home run, but the joy that comes from realizing none of that really matters because happiness isn’t a moment or an accomplishment but a state of mind, or, in this case, a state of grace.

For those in the Diocese of Rochester, a Day of Penance and Mercy will be held Tuesday, March 24. Every parish in the diocese will be “open for forgiveness” from 12:30 p.m. to 7:30 p.m.

For those downstate, the Archdiocese of New York, the Diocese of Brooklyn, and the Diocese of Rockville Centre, will jointly hold “Reconciliation Monday,” encouraging Catholics to come back to confession. Next Monday, March 30, every parish in the New York City area will be open for confessions from 3 p.m. to 9 p.m.

If your diocese or parish is making a concerted effort to bring people back to the Sacrament of Reconciliation this season, be sure to leave information in the comment section.