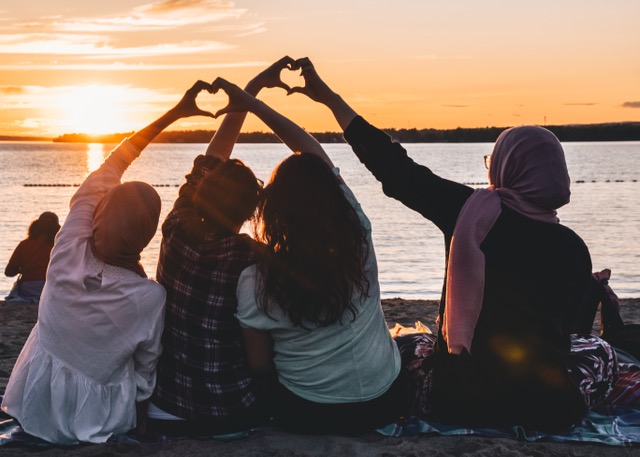 News of Russia’s attack on the people of Ukraine hit like a nauseating wave as news headlines scrolled by on TV the morning of the invasion. I could feel a deep sadness tinged with anxiety rising as I watched images of people huddling in Ukrainian subway stations that had become bomb shelters. Why is it that powerful people are never content with the enormous power they already have but must continue to amass more, even at the expense of lives ended, futures destroyed?

As my teenage daughter and I watched the news, I pointed out that the people fearing for their lives and clinging to each other underground could be people from Anywhere, USA. People with families and homes, hopes and dreams. People just like us. It’s only when we forget that truth that we get into trouble.

Years ago, in a reflection about working toward peace, Mother Teresa wrote: “Today, if we have no peace, it is because we have forgotten that we belong to each other—that man, that woman, that child is my brother or my sister. If everyone could see the image of God in his neighbor, do you think we would still need tanks and generals?”

While we can hear this beloved saint’s words and nod our heads in agreement, wondering how political leaders cannot see the common humanity that binds us together, the truth is that we often don’t recognize that same truth in our own lives. It’s easy to love strangers on the other side of the globe, people whom we will never meet. What’s harder is to do the same with the people closer to us — the co-worker who annoys us, the relative who pushes our buttons, the neighbor who holds a different political opinion.

Which brings us to another beautiful-but-tough-to-live teaching by another saintly Catholic woman, Dorothy Day, who said: “I really only love God as much as I love the person I love the least.”

Who are the people we “love the least,” maybe not in obvious and hateful ways but in ways that slowly eat away at our compassionate nature, that harden our edges and eventually our hearts? It may be difficult even to admit to ourselves that there are people we actively refuse to love or even like, but we’d all be living saints if that were not the case.

The problem is that when we allow the smoldering embers of anger and hatred to take root in our hearts, they give oxygen to larger fires of anger and hatred. Taken to the extreme, that raging fire can lead one man, one nation to rise up against another and kill innocent people for personal and political gain.

In truth, what we’re seeing play out on the international stage is not much different from what happened 2,000 years ago. As we journey through Lent, we see fear and hatred fuel the throngs who go from following Jesus of Nazareth devotedly to demanding his crucifixion. An innocent man who challenged the status quo is turned into the enemy, not because he is a danger to the people but because he is a threat to power. By portraying Jesus as “other,” the power brokers were able to turn the people from love to loathing and in short order have them calling for Jesus to be hung on a cross.

Dorothy Day also said: “The greatest challenge of the day is: how to bring about a revolution of the heart, a revolution which has to start with each one of us?” We may not be able to stop a war on the other side of the globe, but we can stop the war in our own hearts? We are no different from the people hunkering down in bomb shelters in Ukraine. There is no “other.” We are one.

Photo by Noorulabdeen Ahmad on Unsplash